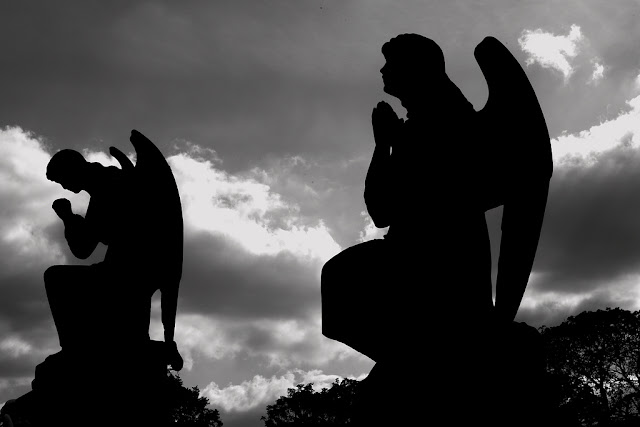 I've been remembering things:
April 23, 2004,
the day that I overrode Daddy's DNR
and insisted that the medical team
place him on life support;
that they provide indisputable,
unequivocal evidence
that he could not recover.
I truly believed
there would be a miracle...
one so great
it would be known
far and wide.

Here's the prequel:
You may remember that he was
admitted to the hospital on April 2nd
and that Pesach was April 5th - 13th that year.
Here's that part of our Passover journey:
I had accompanied his gurney
to radiology for a CAT scan.
There were chairs lining the walls of the hallway,
so I sat down to get some rest
by leaning my head on my cane.
I heard a man's voice say,
"Can I help you?"
When I looked up,
I saw a young man and a young woman sitting next to him,
with an infant on her lap.
They were about 25 feet away.
I thanked him for asking
and told them I was just resting
while waiting for my husband
to return from a test.
Thinking they might need to talk,
I continued the conversation.
When I asked him the name of the child,
he told me it was Elijah.
Elijah!!!
What are the odds?
I couldn't wait to tell your father
that two angels came during his test--
and Elijah was with them.
Now everything was going to be all right.
When I told Daddy,
he kind of smiled that little smile I knew so well ...
indulging me for one of my
wacky booga-booga interpretations, yet again!

But --
He did improve
and by the fifteenth,
he was up walking to the window,
drinking coffee that Uncle Jim bought from Dunkin' Donuts
and making plans to go fishing with him.
Then, a day or two later --
the infection.
The bitter cup that I never imagined.
I believed that there would always be
more time;
that our Redemption would be on
the last day...
the two of us...
together...
hand in hand.
But not to be.
He was gathered to wait
with other family souls.
I've accepted that
it was meant to be.
Always pray
for your father
as he prays
for you.

Editor’s Note:  This year, Passover ends tonight at nightfall. My father died at the age of seventy-one two weeks after the end of Passover twelve years ago; may his memory be a blessing.  I believe that the angels came for him on the day that they spoke to my mother, but were moved by my mother’s kindness even when she was sad, tired, and afraid for my father’s sake.   As a reward for her selflessness, I believe the angels prayed to God and asked Him to allow my father to live just a little longer as a special gift for my mother, and that God granted their request.

I discovered this “found” poem in an email that my mother sent me a few days ago.  I arranged my mother’s words in verses, but not a single word, word order, punctuation mark, or even paragraphing was changed.
Posted by Steven Wittenberg Gordon, MD at 1:12 PM