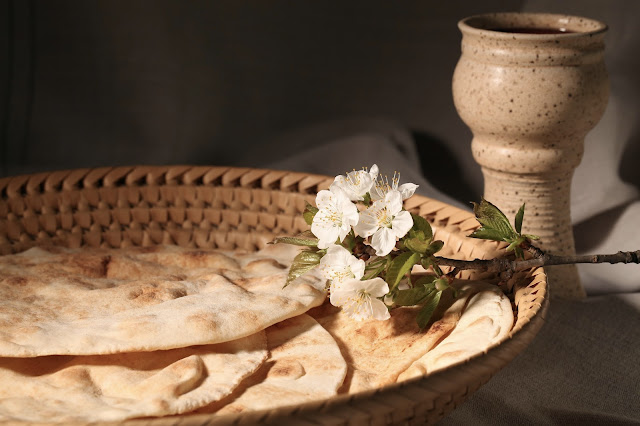 The thirteen prepared a feast in the upper room.
A long wooden table, set as if for a wedding
rehearsal for the bridegroom and his beloved,

has olive bowls placed amid stacks of barley cakes
made from last fall’s harvest, and dried dates
& figs with their sweet syrup to drizzle on them.

A pot—of barley, peas and lentils,
and a few broad beans from the early spring crop
—dangled in the hearth; steamed over coals.

One disciple brought tilapia fresh from the lake;
fire-roasted the fish golden brown before laying them
on earthen trays next to clay pitchers of goat’s milk.

Bitter greens laced a ceramic appetizer dish
by the olive oil—infused with oregano & thyme,
as well as laurel, sumac and hyssop—to be sopped up

with a piece of matzoh He had given his friend,
the one who couldn’t stay for the rest of the meal
and would miss the breaking of unleavened bread

and grasp its meaning, but he had already seen
the miracles of the loaves & fishes years earlier
on the grassy fields of Capernaum.

Nor would he drink the fine wine
transformed, not unlike the water poured out
at the wedding feast in Cana of Galilee.

…But there would be no lamb,
no lamb to be served at the table, for he went
to sell the Lamb to the priests

whom they would slaughter on the morrow.

Poet’s Notes: When I first wrote this poem in March 2013, it was right at Passover. I imagined what the meal was like on the day before the Passover meal—preparation day. I had some ideas and since I knew where this poem was going immediately (not a usual thing for me) I felt comfortable doing research (comfortable that it wouldn’t suppress my creativity) before completing the first draft on paper).

I was careful to include the symbols for Israel: figs, grapes (wine), olives. Also, I specifically mention tilapia, which is not an anachronism, but known as “Peter's fish.” It is available in fish markets all over the Holy Land and was likely one of the fish ubiquitous in the Sea of Galilee and what the fishermen-disciples often caught.

Editor's Note:  I have always appreciated the melding of the sister religions, Judaism and Christianity, that occurs on Pesach or Passover.  Jesus was a Jew, and the Last Supper was a traditional Passover seder.  The wine and the matzoh took on different meanings for the proto-Christians at that seder, but the essentials in both major religions are all there.