Poem of the Day: “Stables” by Mary Soon Lee

Songs of Eretz Poetry Review is pleased to present “Stables” by Mary Soon Lee.  Ms. Lee was born and raised in London but has lived in Pittsburgh for the past twenty years. Her poetry credits include the Atlanta Review, Ideomancer, and Star*Line. Her poem "Interregnum" won the 2014 Rhysling Award for Best Long Poem.

In the stables,
King Xau found himself again,
or found the man 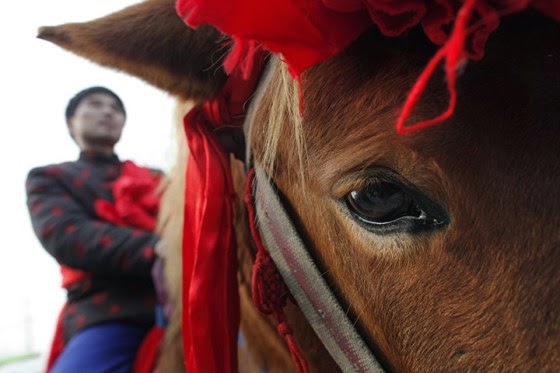 he might have been
if he had never been crowned,
never gone to war,
never led other men
to their deaths.

Half an hour at a time
squeezed between meetings
and training exercises,
the stables secured by his guards.
Only Khyert, once his stableboy,
inside to watch him groom Micha
or Pica or Narson or Romer,
to sit beside him
on a hay bale,
breathing leather, manure, dust,
the scent of the horses.

Xau's words already spent
on rice farmers, ministers,
ambassadors, advisors;
on irrigation, taxation,
alliances, strategy,
so that sometimes
he had no more
than a handful of words
for the boy--
Khyert, younger even than Xau,
turned fifteen that autumn.

But sometimes they spoke
at length about the horses,
both Xau's own mounts
and the others in the stable,
about the condition of the pastures,
the chafing of a girth,
a horse off its feed,
while Khyert rubbed oil
into the saddles,
asking nothing of Xau,
then or later.

Xau listened
more than he spoke,
received more than he gave,
though he asked nothing of boy or horses
beyond their company,
but boy and horses alike offering him,
unasked and without restriction,
their hearts.

Poet’s Notes:  “Stables” is part of my current work-in-progress, a novel-length heroic fantasy poetry sequence. The poem is a personal favorite of mine because of its quiet mood, and because it shows how unconditional friendship helps the king to recover from a war. Several other poems from the sequence may be read at http://www.thesignofthedragon.com.

Editor’s Note:  This is a lovely prosaic poem with a story that held my interest.  The interaction between king, boy, and horse is magical.
Posted by Steven Wittenberg Gordon, MD at 4:28 PM