Poem of the Day: “Typhon, a Prophecy” by James Frederick William Rowe, Poet of the Week

Songs of Eretz Poetry Review is pleased to present “Typhon, a Prophecy” by James Frederick William Rowe, Poet of the Week.  A biography of Mr. Rowe may be found here:  http://eretzsongs.blogspot.com/2015/02/poet-of-week-james-frederick-william.html. 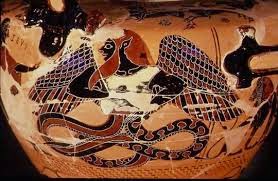 But no more!
He rises from the lava
Streaming with rivulets of the same
And steaming with the heat of the Earth
Glowing as molten bronze
He stretches to the stars
The boiled clouds dissolve to steam
And the winds carry the heat
In cyclones of flame

We were godslayers
Arrogant in our deicide
We proclaimed: "Now ends the age of unreason
The Epoch of Belief!"
Faithless, we thought ourselves
Intrepid infidels, bold blasphemers
And now in bondage to
The ancient nemesis
We will weep

Poet’s Notes:  Zeus’ great, monstrous rival for the throne of heaven inspires “Typhon, a Prophecy.”  Specifically, I was inspired by the depiction of the Greek poet Nonnus http://www.theoi.com/Gigante/Typhoeus.html of how Typhon would have reigned over the Heaven in his triumph.

Typhon's monstrous lawlessness stood in contrast to the divine order of the Olympians, underscored by Typhon's birth directly from Gaia, or else from Hera via parthenogenesis. In either case, his female-only birth makes him something like a product of spiritual adultery, especially as he has not the descent of Zeus (from Uranus to Cronos) to justify his kingship, and Zeus had not won the justified scorn by refusing his role as father as Uranus and Cronos had done. Typhon is injustice personified, and the wild, elemental forces of creation upsetting the careful ordering of the Logos.

Typhon is the embodiment of our pride in thinking ourselves "above" the divine. Typhon thus to me represents the unchecked passions of an unrestricted humanity too proud to recognize the necessity for a virtuous restraint rooted in a recognition of a divine order.

Editor’s Note:  The allegory here is chilling, and the turn at the end is particularly well done.
Posted by Steven Wittenberg Gordon, MD at 7:35 PM