Poem of the Day: “Rosemary’s Lobotomy” by James Frederick William Rowe, Poet of the Week

Songs of Eretz Poetry Review is pleased to present “Rosemary’s Lobotomy” by James Frederick William Rowe, Poet of the Week.  A biography of Mr. Rowe may be found here:  http://eretzsongs.blogspot.com/2015/02/poet-of-week-james-frederick-william.html. 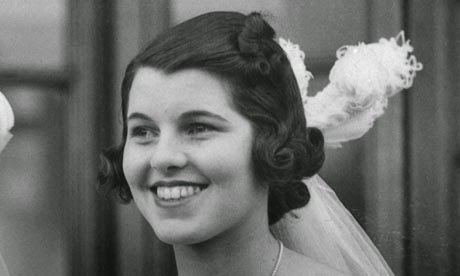 Rosemary Kennedy
A pretty, charming child
But sadly slow
She liked Winnie the Pooh
And writing in her journal
She did not do much else

She has become so troublesome
Sneaking from the nuns
Would that she were still a child
She was not so bad then
But as she grows
She becomes worse: What can we do?

Underneath the upper eyelid
The instrument goes
Originally an ice pick, and now not much different
Twisted to cut through the grey matter
Then driven in further again
"Rosemary, dear, recite the Lord's Prayer for us?"

Poet’s Notes:  "Rosemary's Lobotomy" is a poem that originally saw publication in Big Pulp's Kennedy Curse anthology, alongside "Salute" and "Goin' to the Moon", all three of which saw a live-performance by yours truly in a poetry reading down in the Village. It is one of my favorite poems of my own composition and is inspired by the relatively obscure history of Rosemary Kennedy's tragic life, which I had read about a long time previous to writing the poem.

Rosemary Kennedy was the sister of JFK, RFK, and Teddy Kennedy, and suffered from mild retardation. She had the intellectual capacity to read Winnie-the-Pooh, and was given a chance to appear before the King George VI, where after curtseying flawlessly, she stumbled off to the side. These events are famous enough to be included in many accounts of her life (including the small article on Wikipedia), and I included both scenes as I felt they exemplified her early life experiences, as well as adding to the emotional resonance of the poem.

Things went incredibly dark for her after she grew up. Apparently, puberty did much to hurt her mood, and as she grew into a woman, her personality became quite turbulent. In order to save themselves from embarrassment and scandal, the Kennedys decided to have her lobotomized, and subjected her to that barbaric practice in 1941. The procedure essentially destroyed her; she was reduced to the intellect of a two-year-old child, and was institutionalized until her death in 2005. She never again read Winnie-the-Pooh, and her father never visited her. The usage of the Lord's Prayer in the poem came from an actual account of her lobotomy, as the doctor asked her to recite it while her brain was being destroyed to "know when to stop."

When the poem was recited, I received numerous laughs over the initial garbling of the Lord's Prayer. The amusement that many felt upon hearing that part of the poem was well balanced with the somber response I received by the end. This was intentional, as I expected people to get the "wrong idea" from the initial stanza, and so I use this emotional dissonance to add to the affect this poem has on the reader or audience.

Besides telling the tale of an unfortunate young girl, I wanted to expose psychiatry's brutal history. Psychiatry had for many years been glorified butchery. Of all the medical sciences, psychiatry has without a doubt been the cause of the most misery. Thousands upon thousands of people were subjected to lobotomy, almost all of whom suffered terrible long-term consequences. Add to this the disastrously unethical procedures associated with Behaviorism, and the various other ethical monstrosities perpetuated by the science, up to and including the dubious use of something near to amphetamine to treat the extremely over diagnosed "ADD/ADHD," and you have nothing less than an history of systematic abuse of the extremely vulnerable (the mentally ill).

Of course, this is not to indict all psychologists and psychiatrists, or all the achievements of the field. Undoubtedly, some people have been well served by psychiatry, and fairness demands such recognition, even as justice implores us to recall the sins of the profession over the last century.

Editor’s Note:  Speaking not only as the editor of a poetry publication but also as a physician, I must, for the most part, agree with Mr. Rowe and the chilling message of his cautionary tale.  Those interested in purchasing the original anthology in which the poem first appeared may do so here: http://www.bigpulp.com/#!store/c1r46/!/The-Kennedy-Curse/p/36299986/category=8768133.

The picture that accompanies today's feature is that of Rosemary Kennedy.  It was taken in 1938 on the day that she was presented to King George VI.
Posted by Steven Wittenberg Gordon, MD at 8:17 PM