Poem of the Day: “Empty Cradles” by Rie Sheridan Rose

Songs of Eretz Poetry Review is pleased to present “Empty Cradles” by Rie Sheridan Rose.  Ms. Rose’s poems have appeared in Penumbra, The Voices Project, and Wolf Willow Magazine, as well as in several anthologies and chapbooks. 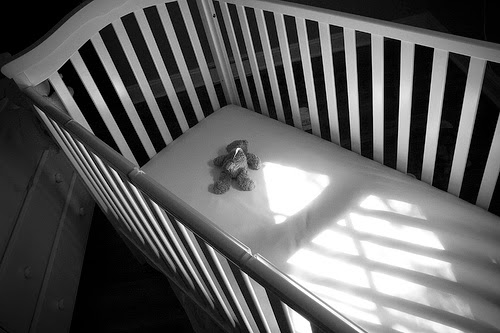 When I was a little girl
my baby doll was a
constant companion.

His name was Danny --
and I can tell you where
he is this minute...

As I grew up,
I dreamed of
white picket fences.

I was a 2.5 kid
kinda woman,
with Victorian tastes.

Husband one
came and went.
There will be time.

Husband two
given to the arms
of his lover.

And the nieces
and the nephews...
but there is still a chance.

Until there isn't
any more.

And husband three
says he wouldn't want
to be a dad anyway...

but the thought
that the
cradle will never rock

makes the new
niece in the family
all the more precious

and I
hurry faster
past

Poet’s Notes:  I wrote this poem in 2007, soon after the birth of my youngest niece. I had always wanted children, and in 1997, I found out it was biologically impossible. It has made me cherish the children in my life even more--even if they aren't mine.

Editor’s Note:  Ms. Rose captures the sadness of the childless with poignancy and respect.  I am sure that her poem will resonate with many.  “Empty Cradles” first appeared on the Writers Cafe website.
Posted by Steven Wittenberg Gordon, MD at 2:56 PM