Review of "Fidelity" by Ben Heldt 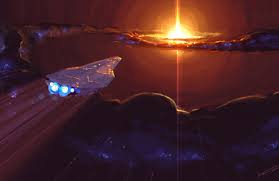 "Fidelity" by Ben Heldt appeared in Daily Science Fiction on March 4, 2013.  "A man works through issues of abandonment when his wife, an interstellar astronaut, leaves him and their son behind with an android replacement."

The Enterprise of Star Trek TNG carries not only astronauts but their spouses and children, but this preservation of family is unlikely to occur in actual long space voyages.  The matter is being debated, however.  Just last night, I watched a repeat of Red Eye during which it was discussed that, apparently, husband and wife couples are being seriously considered for the first manned mission to Mars.  On a more personal note, I always dreamed of being on that first manned trip to Mars--and as a USAF flight surgeon with a gift for languages, realizing that dream was not exactly out of the question.  It was not, that is, until I married and had children.  I could never leave them behind here on earth, no matter what my dreams of space exploration.

Mr. Heldt addresses this issue head-on in "Fidelity," the name of the spaceship that ferries away mother and wife from husband and son.  In her place, the astronaut leaves an android (known to be one to the father but not to the son) that is an exact copy of her in every way--except that it is not she and never will be.  Timely, relevant, thought-provoking, poignant, and beautifully written.  7 out of 7 rocket-dragons.
Posted by Steven Wittenberg Gordon, MD at 10:36 PM