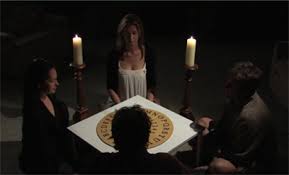 "Spirit Gum" by Mike Resnick & Jordan Ellinger appeared in Daily Science Fiction on March 8, 2013.  "A stage magician turned magician debunker accepts a challenge from a medium who claims she will communicate with his dead wife through a seance."

Numerous venues that advise writers how to write are fond of the phrase, "show the story, don't tell it." I have always disagreed with this advice.  In my opinion, stories are usually told--aren't they?  So, it was refreshing and somewhat of a vindication to read "Spirit Gum," a story with little dialogue, told by the authors/narrator.  4 out of 7 rocket-dragons.
Posted by Steven Wittenberg Gordon, MD at 8:51 PM