Songs of Eretz Poetry Review is pleased to present “Orrery” by Simon Constam.  Constam hitchhiked around the world at eighteen, something he describes as probably his “most formative experience.” He worked for a publisher for a couple of years then owned a small bookstore in British Columbia for a long stretch. Today, he has a small sales consulting business.

Constam wrote poetry as a young man but gave it up after just a few years, put off by the growing influence of academia. One day in his middle fifties, thirty-eight years after he’d given up, he returned to poetry. Constam has had a few poems published in online magazines and is looking for the right publisher for a complete collection of poetry as well as a poetry chapbook.

If I go outside and it happens to be
a cold, clear night,
I take an hour there
but I still damn the cover of dirty light
that obscures the stars.

And then I say nothing when I’m back inside.
Everyone is sitting around watching football.
No one asks me where I’ve been.
My bride is feigning interest in the game,
giving me the stare when I pass between
our guests and the 60-inch television.

Time is wasting away.
She is going to be beautiful for only so long.
That’s true, isn’t it?
I think you know what I mean.
Love thinks time is obscene.

As like or not, I know what love is.
She enters and leaves.  I don’t know
enough of what she thinks of me.
We never mention it, and I am and she’s
holding too fast to the idea we brought with us.
And even though it’s a neutral darkness,
it’s still the kind from which you can't be saved. 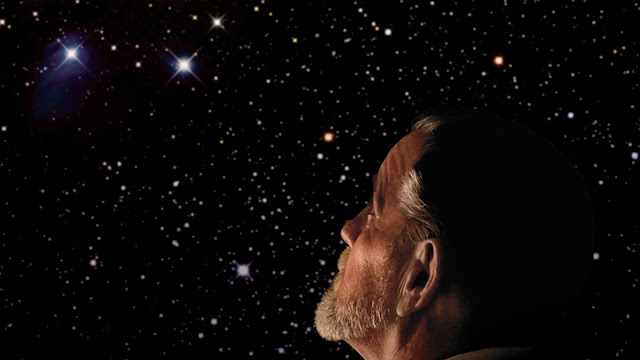 And then they’re gone.
And she turns to me
sympathetic, and yes
of all the versions of her,
the one that softens into love
is unclear tonight.
She has it, I assume, at her fingertips
but perhaps not. She goes upstairs.

I’d follow, but she hasn’t asked me to,
so I pause at the window by the back door
to imagine the planets in their places
revolving at the speed they’ve been given
seeming to move closer to one another,
as often as not, appearing to
have absolutely nothing to do with each other.

Poet’s Notes:  I was married for thirty-eight years. The breakup of the marriage came in big part because the calm devolution towards disinterest and unfeeling became too much for both of us. Also, not coincidentally, I had started to write again, which you may read, I suppose, as self-examination. Late in life beginnings can be pretty silly but they can also be incredibly profound. The jury is still out on which of those two roads I am travelling.

This poem came about one night when we had family over, and I had no interest whatsoever in sitting around watching a football game. It was one of those moments when alienation starts slowly and spreads to all nearby relationships. Contemplation of the stars and planets has also always led me to a feeling of alienation, and that also snuck into the poem.

Editor’s Note:  The title sets the tone for this interesting and moving piece, leading to a well-executed poetic conceit.  The best part of the poem for me is the twist on the worn out metaphor of comparing a lover to the celestial bodies--in this poem, the comparison is not one of beauty but of isolation, the heavenly objects revolving around each other but never touching, just as the speaker and the wife in the poem do.
Posted by Steven Wittenberg Gordon, MD at 7:45 PM