A Memorial Day Poem by the Editor

He walked in to the Military Entrance Processing Station.
A hayseed from Missouri, he had never been to a doctor
Until the day he volunteered for service with the Navy. 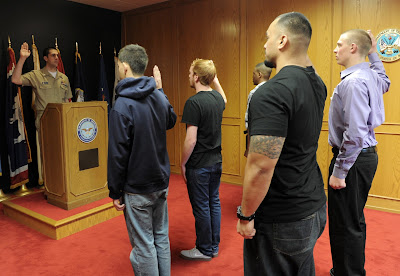 Years of work on the farm had made him hale and healthy--
A physical specimen--and years of hunting for his food
Had made him a crack shot with mild hearing loss on the left.
He had never seen the ocean let alone been on the ocean
But late hot summer evenings spent at the local waterhole
Had made him a strong if untrained swimmer.
At the age of seventeen he swore the oath of allegiance
That everyone entering military service must swear:
“To support and defend the Constitution of the United States
Against all enemies foreign and domestic”
And he left Missouri, its seas of grass, its open spaces, and
The hayloft where he often slept when nights were warm
For the violent Atlantic, the placid Pacific, the mysterious Indian,
And the stacked bunks in the forecastle of an aircraft carrier
Where he would spend month after month below deck cramped
And claustrophobic shut away from sun and sky and sea.
Yet during his sleep interval--for day and night had no meaning--
Racked in his bunk sandwiched between two others
And an arm’s length from another stack of three
He would think about all he had left behind in Missouri
And smile not for himself but for his ma and pa and
Brothers and sisters and all of his friends and fellows
Who could sleep all the more soundly because of his service
And that anyone who would try to take away their freedom
Would have to get through him and the US Navy first.

Poet’s/Editor's Notes:  On Memorial Day, we pause (or should pause) to remember those members of the armed forces who died in service to the United States.  As with the subject of my poem, every one of them went through a Military Entrance Processing Station (MEPS) at the beginnings of their military service.

I work part-time at the MEPS in Kansas City, Missouri doing physical examinations on applicants for military service.  My poem typifies the applicants that I evaluate--brave if naive young men and women, all of them ready to put service before self.  Although I could have had the subject of the narrative pictured as joining any other branch of the service, I chose the Navy as I continue to be astounded by the exceptional bravery of the many Navy applicants from Missouri who have never seen the ocean.
Posted by Steven Wittenberg Gordon, MD at 12:23 PM