"Ever and Anon this Way with Shades" by James Frederick William Rowe, Frequent Contributor

Ever and Anon this Way with Shades
James Frederick William Rowe 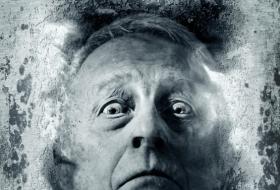 What song
What song
Will he sing today?
Returning he will sing today
And though I know not this tune
Croon
He sweetly will till eventide

I am
I am
A memory
Alone and lost, a memory
And as the lute no longer played
Stayed
The strings will sound no more

Poet’s Notes:  This poem is about a pair of musician brothers, one of whom has died and now exists as a shade whose existence seems to depend on his brother's recollection of his life. He fears, and rightfully so, that with time he will be forgotten, and when he is forgotten that he will no longer exist. That is why he is a "shade", a term I take to imply the spiritual state of said beings whose ghostly essences are unstable and liable to dissolution, as in the Homer's depiction of the afterlife. I thought this suited a poem about a ghost's trepidation over his fate, and indeed there is always a sense that ghosts are sad beings to begin with, given that they are no longer part of the world of which they no doubt wish they could once again be a part.

This poem is about characters that have lived a long time ago, hence my use of the terms "eventide" and "lute". Eventide is a fairly archaic term, and the lute went out of favor by 1800. I imagine this poem takes place sometime in the 17th century, which would correspond well with a time when the lute was still a common instrument, eventide a term in common use, and clocks (which are referenced) found in homes. Obviously, I intended that it should have a feeling of the past but I have kept it ambiguous as to exactly when.

I also feel the poem’s setting melds well with the structure I conceived for it, a format is of my own creation. It follows these rules:

1. Each stanza is 7 verses long.
2. The first two verses are two syllables long and are repeated.
3. The third and fourth verses are related to one another, with the third verse being repeated, or at least partially incorporated, into the fourth verse.
4. The 5th verse is longest and the concluding word is rhymed with a single-word 6th verse.
5. The 7th verse concludes the stanza and continues from the single-word 6th verse.

Concerning the meter, I am a little loose aside from the restraints explicitly mentioned but I attempt to keep the length of the verses relatively uniform, with some deviation.

I have used this format for other poems and am obviously pretty pleased with it. I think it gives a song like quality that suits the theme of this specific poem and gives a sense of desperation to the narrative voice. I really like how musical each stanza sounds to me, especially with the pause in the single-word rhyme that precedes the ending verse.

The poem concludes with the hope for continued existence being lost. The dead brother resigns himself to being a fading memory that will in time be forgotten. This really goes hand in hand with the unused lute gathering dust, and "the strings will sound no more". Though he wishes to be remembered, he will not be, and in time the melody of his life will no longer be heard.

Editor’s Note:  This is one of the best from James that I have ever published--and as James’ best are quite good, that is saying something!  Even though Poe did not use James’ unique and lyrical poetic form, I think he would have approved.
Posted by Steven Wittenberg Gordon, MD at 7:25 PM