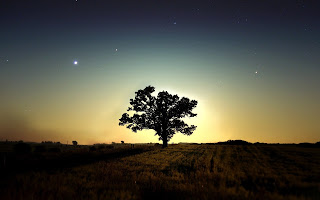 Poet's Notes:  I have always loved dusk when the hustle and bustle of day yields to the stillness of night, especially if sitting outside on a porch, perhaps by myself with a good book, perhaps with others, or that one special person. When twilight fades to star shine, frogs might begin to announce themselves, joined by a cricket or two, or the only sound might be the soft hum of insects in the distance. With a haiku, most of that has to be imagined.

I chose "nocturne" to represent nature's symphony because it is by definition a musical composition suggestive of night. Also, it worked with my syllable count, an inescapable requirement of 5-7-5 haiku.

Also for the syllable count, I added "hush" to the second line, and then decided that I liked it because it could be interpreted two ways: the natural hush of night falling or someone hushing others to listen.