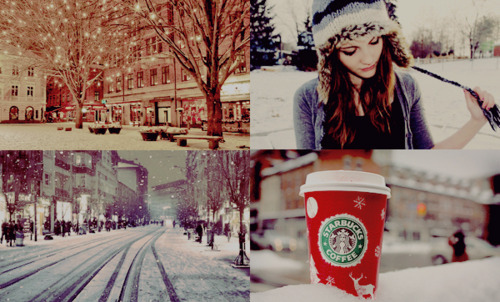 Being from a hot and humid South,
I let myself enjoy
the crunch of snow,
with all its novelty.
I stepped mostly on snow
Just for the sound, never minding
that it was less slippery
than the sections of ground covered
in a barely visible layer of ice.

In Starbucks, the young barista
could not resist her own yawn,
And her mouth spread widely, seeming
almost like an exaggerated yawn,
And she did it right in a customer’s face, inadvertently,
as he stepped up to order, and then upon completion
of her yawn, she laughed at herself
and it was a wonderful, goofy laugh
with a snort, and the customer smiled too.

There was a marble counter along the side
of the coffee prep area, with only two stools,
resembling a bar; and at the bar, there was an old man seated
wearing an armed forces cap, and although the man was old,
his hair white, his skin wrinkled, I could tell
he had been handsome in his youth.
It was somehow very easy to envision the younger him,
And then I saw him sitting at a bar, decades ago,
existing there in the purity of the moment as he was now,
with a beer instead of a coffee,
with carnage still vivid and not yet fused
to abstract glory; instead, with the world still at stake,
the victors unknown, the ladies all stylish…

With café americano in hand,
I smiled as I tread carefully down icy blocks.
A modern girl emerged from a building,
with black glasses, reddish hair,
and her coat was powder blue,
The lightest shade of blue I have ever seen
in a coat, and a seasonal thought came to me again,
That women look so beautiful in winter
when they are bundled, when they have their mittens
and scarves, and the color of their hair seems so pronounced
spilling out over their coats from under wool hats or beanies;
It strikes upon the male protective instinct I think, but
They seem so dainty as winter tries to pummel this land,
With lines of stinging cold and white trickling through
the tree-bearing mountains,
With chiaroscuro
in every step and shadow.

More strangers emerge to cross my path.
The old woman with frizzy white hair
and Coke bottle glasses who seemed so eager
to throw her empty paper cup away
after spotting a small wastebin by the bus stop.
Her beady eyes practically lit up as if
she was unwrapping a present, when really
she was gifting her trash to the landfill.

I saw also the little Native boy
who broke up the layer of ice that had crusted
over the brownish, frosted grass,
And for this self-appointed task,
he used both his little boots
and a marker he pulled from his backpack.
His goal was to smash it all up
into smaller ice chips,
to satisfy some wondrous curiosity.

And I am glad for winter and all challenges.
I remember summers here, going through the muck
of pebbled beaches, lifting rocks, watching
crabs scuttle out from under the rocks.
I felt guilty then, having displaced them
from their comfort and hiding,
but looking up now I ask the sky,
“God, if I am ever under a rock, will you —
or better yet, a childlike force,
an innocent and playful force —
come along to lift that rock?
So that I will be made to scuttle
and find somewhere new?
So that I will not find too much comfort
in some dark, protective place
with a weight over me?”

Poet’s Notes:  This is one of my more journalistic poems, capturing a morning when I went to a Starbucks to pick up my café americano (venti, black) and then subsequently walked around on icy sidewalks. I freely admit that all of these characters were real, but fortunately the law does not require me to purchase their life rights. Nonetheless, I thank these strangers for their cameos in my poem.
Posted by Steven Wittenberg Gordon, MD at 9:27 AM