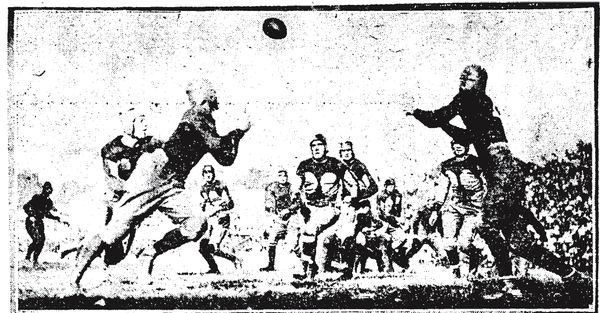 With the clock running out, down by five,
the losing team doesn’t have much hope beyond
rosaries and holy water in their back pockets.
The Center snaps the football into the hands
of the quarterback, who drops back behind
the line of scrimmage, fakes left, cuts right
for what looks like an end run, but hands off
the ball to the halfback running in reverse—
a kind of chaos that only desperation brings.
On the fly, the running back madly searches
for any eligible receiver way downfield.
For a moment, he sees angels in the end zone,
blinks his eyes, focuses on the split end
near the fringes of the touchdown marker
and cross-fires the football, while still
on the run, way deep.  A Hail Mary pass.
The coach on the sidelines, praying, as leather
spirals through thin air, arcing high into sun.
Goalposts glint like a pot of gold at the end
of a rainbow. The receiver’s arms stretch
out in front of his stride as the ball drops
through all that sky, as if from heaven,
threading through waving arms of pass
defenders into a cradle of fingers, the unerring
target. In split seconds, he works the ball
to palm of his hand, pulls it in close
to his heart and falls to his knees
for the winning score.

Some years later when Notre Dame faced an undefeated Ohio State team (November 2, 1935) and trailed 13–12 with less than a minute to play, William Shakespeare, Notre Dame’s replacement quarterback (Pilney was injured), threw a “Hail Mary Pass” to Wayne Millner, who caught the ball on his knees to win the game. The radio announcer said, “I always said Shakespeare had a pair of rosary beads and a bottle of holy water in his back pocket.” http://en.wikipedia.org/wiki/List_of_Hail_Mary_passes_in_American_football

“Our Fathers, They’re Watching,” is a variation of that account, and the title plays on those typical Catholic prayers as well as the 1951 movie Angels in the Outfield (at least tangentially).

The structure could be taken as that of a football field (approx. 120 x 53 yd), which is about 2:1 length to width. But I must confess, that I did not make that calculation before I wrote the poem--it organically evolved that way.
Posted by Steven Wittenberg Gordon, MD at 11:42 AM