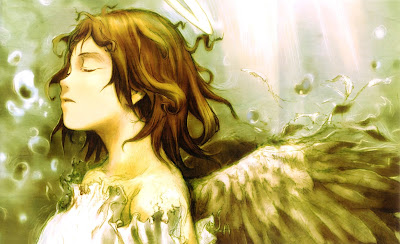 She thought she would sprout wings
When her back began to ache
Instead what pushed through her skin
Were petals, pink and gold

Layered about each other like delicate scales
She at first felt crushing fear and disgust, but
Once outside, the wind touched her new appendages
And scattered them far beyond what her eyes could see
Where they touched the earth, flower buds grew
In a thousand different shapes and hues

Poet's Notes: This one is inspired by a show called Haibane Renmei where mystery surrounds a set of girls who sprout wings. Instead of ordinary feathered wings, I thought it would be cool if their appendages were made of something else. With the thought of spring, the appendages easily became flower petals, and my character became the Harbinger of Spring, similar to winter's Jack Frost about whom I've also written poems.
Posted by Steven Wittenberg Gordon, MD at 10:56 AM