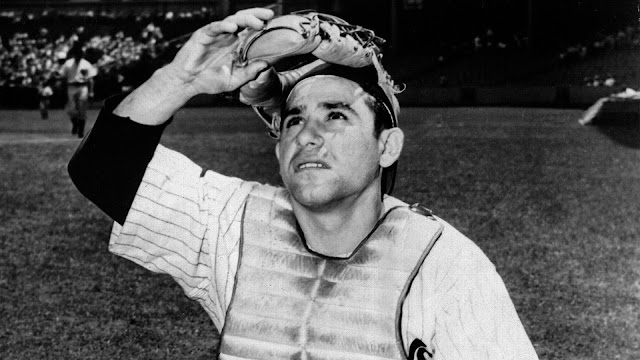 September is ending in the west
a low roll of thunder
a broken promise of rain.

The fireflies have all faded,
not a cicada is singing
there’s just the twist of a lid
that echoes in the night
out beyond  the backporch light
where the last moon of summer drops
just over the centerfield fence
above my extended glove.

One last walk-off home run by Yogi tonight
brings the season to a close
breaks my heart
finds me already missing April
moving into May,
June, July and August
as they spiral into the coming of cooler nights.

Soon the dark will deepen
into shades of  the first autumn night,
and somewhere out there
in the pitch of distance
unlit and unwanted,
I sense October, hovering,
haunting me like a goddamned ghost
rattling chains and old broken baseball bats
in summer’s aftermath.

Poet’s Notes:  As the autumn equinox was approaching on February 22, 2015, the great New York Yankee Hall of Fame catcher Yogi Berra (pictured) passed at the age of 90. That started the thoughts that became this poem. This changing of seasons from summer to fall always moves me to reflect on the passing of youth. Berra, being a childhood favorite of mine, exiting this plane as summer and baseball were drawing to a close, brought me a longing for more summer, more youth, more time.

Editor’s Note:  I enjoy the mood Ron creates here as well as the interesting comparisons between weather and baseball.  He captures many competing feelings here, not least among them the ambivalence we have for change, competing with the powerful feelings generated when we experience the exact moment of change.
Posted by Steven Wittenberg Gordon, MD at 2:12 PM