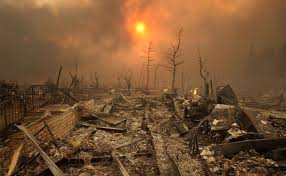 there were cannibals
in the cornfields

the Wabash ran dark;
the face of evil moved
upon its waters

the sky went out

and we staggered helpless
down the cow-path
of perdition

Poet's Notes: Apocalypses are popular these days, so I thought I would treat Indiana (my birth state) to one. An apocalypse entails suffering, and Hoosiers certainly deserve that.  The "Riley" referenced in the second stanza is the beloved Indiana poet James Whitcomb Riley (1849-1916), who often rendered his verse in Hoosier dialect. Like much of Riley's work, this poem has a rural orientation.
Posted by Steven Wittenberg Gordon, MD at 4:18 PM