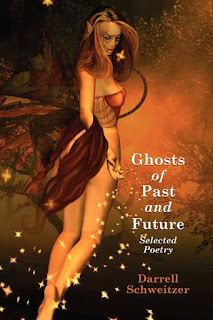 As I began reading this, I thought it would be a fine poetry collection, no more than that. I liked the second poem -- "Cemetery Tour, Montreal, Early November 2001" -- well enough to stick a post-it note by it so that I could re-read it later, but I didn't love it. I liked the third poem "Death is the Great Unwinding," but not quite enough for a post-it note. The fourth poem had a handful of lines that I loved without loving the poem as a whole:

I miss the night sky.
In the grave,
the stars of the deathlands
are few and faint and strange.

But then I read on. And I littered the book with post-it notes. Some poems I liked, some poems had parts I loved, some poems I loved in their entirety. The poems range from science fiction futures to the far past, and they speak of heroes and gods and the passing of all things. At times, such as in the brief "Cautionary Tale" or the longer (and ultimately sobering) "They Sure Eat a Lot in Epics," there is humor to lighten their collective weight.

Among many fine poems, I found nine that I loved: "The Copyist," set in 700 A.D., which sings of epic heroes and the power of story. "We Have Cast Their Idols Down," which I found brilliant and bitterly sad. "When We Think Upon the Kings of Old," which evokes Xerxes, Alexander, and Caesar to talk about the commonality of death. "Sir Canis De Nobody," which takes the told and re-told glory of Camelot and renders it newly moving via a dog's perspective. "After Hours in the Hall of Heroes," which casts a skeptical yet tender eye on heroic warriors. "Helen Returns to Troy," which portrays Helen in her old age, and is marvelous in every detail. "Near the End of the Epic," which pays tribute to the rank and file soldiers from heroic sagas. "At the Earth's Core," where Burroughs' adventurers confront Dante's Satan. "I Dreamed That I Sailed in a Ship of Heroes," perfectly wrought, which journeys from heroes to reality, with two lines that I particularly love:

"Dad, did you fall in the struggle?" I asked.
He replied, "No, I struggled in the fall."