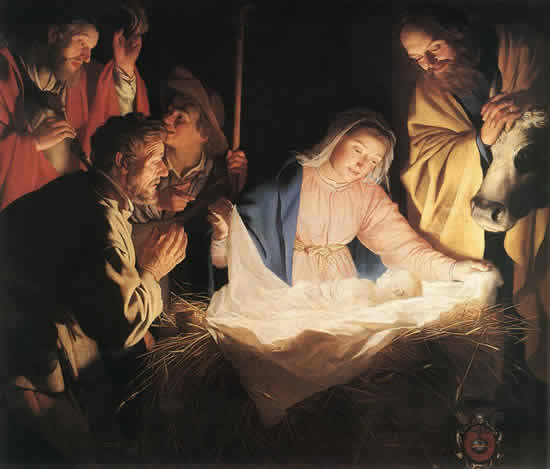 A torch brightly lights the manger,
crushed pine perfumes air. Mother
kisses the infant’s rose-hued face
glowing. Warm light. Diamond-dust
snow covers Jerusalem hills veiled
in moonlight. He is sleeping, eyes
softly closed twitch with dreams.
His breathing measured susurrations.
She senses what he sees—the whole
world drenched in the light, his touch.
The torch flickers, golden straw
cradles infant. For a moment, the Child
flinches as he wrestles for peace
to endure the crux of rough wood.

A dove flutters to his side, coos
while basking in the new light.

Poet’s Notes:  This poem was inspired by a 16th-century French carol, Un flambeau (Bring a Torch), traditionally associated with the Provence region of France. In the song, the narrator is calling to two people to bring a light, traditionally Jeanette and Isabella, two milkmaids who discovered the baby Jesus and ran out to tell the villagers. For the English and French lyrics, see: http://www.familychristmasonline.com/music/trad_french_carols/jeanette_isabella.htm and for the carol sung in French by Diane Taraz, see: https://www.youtube.com/watch?v=iy-qFn48d9s.

When I wrote this on Christmas Eve in 2015, I wanted to play on the Light with all its Christian symbolism (John 1:8 and Matthew 5:14).

There is innocence to the music—it is simple yet powerful. And I contrasted that soft innocence of birth of the Christ child with the foreshadowing of his harsh death. However, I desired to leave the poem with a sense of hope—the white dove, itself a symbol of the Holy Spirit—for the infant (and for the reader), as echoed in the song excerpt in the beginning (French) and ending (English) of the poem.

Any resemblance to a sonnet is purely accidental, though the thought occurred to me to see if I could work in an implied question with the resolution in the volta, but that would have increased the length of the poem, not shorten it to the expected 14 lines.

Editor's Note:  I was going to save this one for Christmas, but in the aftermath of the recent tragedy in Nice, I decided we could all use a little Christmas spirit right now, old France style.
Posted by Steven Wittenberg Gordon, MD at 11:33 AM