The day the king was due home, 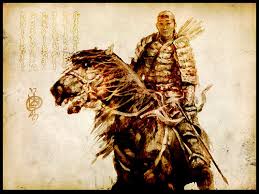 Huang woke long before dawn.
He lay in bed a while,
searching for sleep,
his thoughts turning on King Xau,
shifting from one memory to another,
all the way back to when Xau
was but the least and youngest
of four princes,
how the boy would sneak
into the stables
any chance he could, and Huang,
not yet promoted to stablemaster,
would teach him to clean a horse's hooves
or mend a broken halter.

Still dark when Huang gave up on sleep.
He surprised the overnight stableboy
by arriving hours early;
checked on every horse,
every stall, every piece of tack;
went out to the pastures,
checked the horses there,
the fencing, water troughs,
the state of the shade trees;
went back and rechecked the stables.

Heard King Xau's party
before he saw them--
the clatter of hooves on stone,
the clinking of bridles--
ran to the stables' main entrance
without thought for the dignity
appropriate to his age--
two of the king's guards riding ahead
to secure the stables--
Huang nodded to them,
but his eyes on King Xau
in the distance, riding Micha,
both of them looking well,
and then the king spotted him,
grinned, waved.

Huang came up to him
as the king dismounted.
A moment when both men
attended to the mare:
the king loosening her girth,
Huang rubbing her withers
by way of a greeting.

That done,
Huang bowed very deeply,
his old eyes watering a little,
straightened up to find himself
being hugged by King Xau,
held tight and holding tight
for two full breaths.
All that Huang had most needed
to tell the king expressed
before they spoke a word.

Poet's Notes: This is part of The Sign of the Dragon, my epic fantasy in verse. It is one of many poems in the set that has neither dragons, nor demons, nor magic, nor monsters. Instead it is about friendship. I am fond of the lines about how Huang taught Xau to look after horses, not because of the phrasing, which I tried to keep unobtrusive, but because they show how Huang was kind to a boy who was often overlooked. My favorite part, however, is the last stanza, in which the old man and the young king show their affection for each other without needing to speak. More poems from The Sign of the Dragon may be read at www.thesignofthedragon.com.
Posted by Steven Wittenberg Gordon, MD at 6:15 PM