Poem of the Day: “The Swing” by John C. Mannone, Frequent Contributor and Poet of the Week

The tight-weaved hemp lashed to an overhead branch
where we used to swing, now tethers an oaken bucket.

Slanted snow fills it with perfect crystals of water:
six-fold symmetry, repeating, even as it fades from view

under a microscope. I am mesmerized by ice, by flurry,
by the creak of the pendulum rope swaying to each tick

of time—this untimely clock—there’s nothing uniform
about the swing speeding up, how flakes latch to the inside

of the bucket, or how they cling to themselves
the same way my thoughts cling to you.

Willows droop in wet snow; air, barely cold enough
to keep the sharp edges on the crystals. Their luster,

vitreous, but not diamond anymore, even in diffuse light 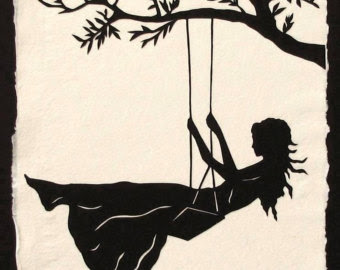 seeping through stratus clouds. They melt on wood,

and into each other becoming indistinguishable masses
perforated by their last breaths. Brown leaves still hang on

the hawthorn, quake against the gray. Dim shadows
from ropes, from bucket, slip over the white ground

mottled with grass, merge with shadows from the past.
Your hair, upswept, soft red tresses brushing your face,

my heart. The last time I kissed you on the swing,
the rope kept quivering… It wasn’t snowing.

Poet’s Notes:  This poem started as a 200-word story prompted by the word bucket six years ago. It underwent many name changes—“The Oaken Bucket,” “Tremulous,” “Shadows Quiver,” “Quivers”—before it became “The Swing” by the tenth revision. Interestingly, the number of words stayed relatively constant and fluctuated from its original 200 words by only 15 words despite the fact of radical structural changes. I mention this minutia to show that our initial drafts may undergo radical change, even for seasoned poets.

“The Swing” is part of a yet to be published poetry collection, Flux Lines:
The Intersection of Science, Love and Poetry, which are poems about love (love wished for, being in love, love lost) that invoke metaphors of science: just as flux lines correspond to the lines of force, which contain the fields (reservoirs of energy), so too then, the lines of poetry contain the energy of emotion, and therefore, of love. It was a semifinalist for the 2014 Mary Ballard Poetry Chapbook Prize (Casey Shay Press). The collection is being expanded to a full collection and has drawn some interest from a Knoxville-based publisher.

The poem risks the inclusion of science, as well as love. The prevailing image came from a problem I had to solve on a take-home exam in a theoretical mechanics class I had taken many years earlier (actually as a junior in college): to determine the period of a swinging bucket collecting snow at a constant rate.

And though the poem was drafted in August 2009 without any snow in sight, the swing in my backyard was a reminder of my life with my wife when I was at the peak of my grief of love lost after our divorce in August 2007.
Posted by Steven Wittenberg Gordon, MD at 7:56 PM