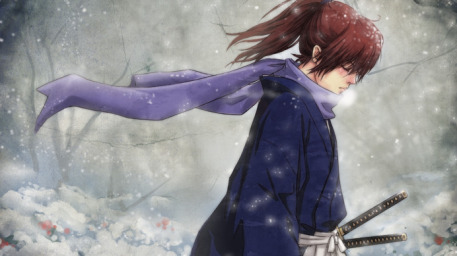 still they sent him to the mountain

together with his brothers
before their father's body stiffened,

the kingdom suspended without a king:
four princes, one crown

(a crown he had no use for,
a crown of war, alliances, duty).

He slept on straw near his horse,
displacing the stableboy,

waited for his eldest brother to return
triumphant, ready for the throne--

then brother after brother vanished
into rock and ice and cloud.

The steward took his sword,
his shield, sent him out at dusk:

no torch, no guide, no horse,
no servant, no food, no water.

Snow deepened under his boots;
he waded through drifts,

fell once, twice. The wind mocked him;
he thought of the warm stable,

the bed of straw, his horse,
sleep -- but sleep meant death,

so he stumbled on. The wind
called his brothers' names.
He shouted back his own name;
the wind laughed. Snow fell.

(she who was bartered for peace
to a man she'd never met).

He fell, pushed himself upright,
saw a black cloud speed against the wind.

She landed beside him, her breath ash,
snow steaming from her wings.

He knelt, but did not beg,
and asked after his brothers.

"One slept. One fought. One pissed
himself. They didn't taste like kings."

She laughed. "And you? What will you
pay for a crown, little princeling?"

"Nothing. I don't want it."
She flamed, and he saw himself reflected

in her scales, a kneeling, shivering boy.
"Then why," she asked, "are you here?"

"Because the kingdom needs a king."
He struggled to his feet.

"And what will you pay for the crown,
little princeling? Gold? Men? A song?"

about the woman whose name he cried
in his sleep. "Not a woman," he said,

his heart on the mountain
where he entered his kingship.)

Poet's Notes:  In the summer of 2013, after a decade writing mainstream poetry, I happened to write several fantasy poems. "Interregnum" was the sixth of these, and the boy and the dragon pulled me into their world and kept me there. Since then, I have written over two hundred poems about what happened after the boy became king, but the broad arc of the tale was shaped by its beginning. King Xau is brave, resolute, honest, fond of horses, and puts his kingdom before himself. I have never written anything else that has meant as much to me.

Editor’s Note:  This is a powerful, old school, epic poem.  As with all good poems of this genre, it stands alone, creating its own past and future, and makes the reader yearn for more.  "Interregnum" was first published in Star*Line #36.4, Autumn 2013 and was a finalist in the recent Songs of Eretz Poetry Award Contest.
Posted by Steven Wittenberg Gordon, MD at 11:26 AM