Poem of the Day: “An Mhaighdean Mhara” by John C. Mannone, Frequent Contributor and Poet of the Week 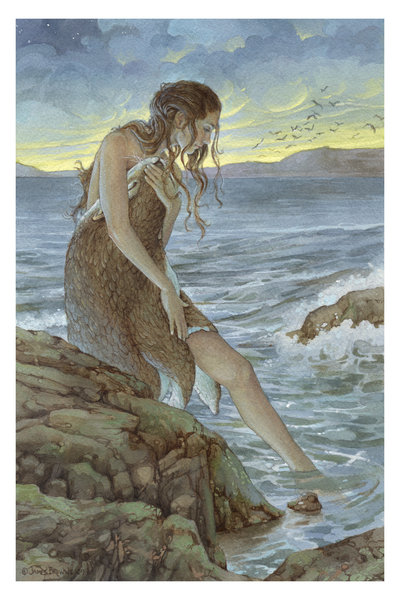 On the crest of the waves,
At the ebb of the tides
— The Secret of Roan Inish by Mason Daring

Every twilight I come
For evensong
For offshore winds
That warm the cooling sands.
I listen for your silky voice
Now lost in the swish of waves.
They beckon me
Pull my feet with every ebb
Toes searching for your pulse
In sifting sand wet with tears.
My heart in solstice
Is farthest from you
When empty night swallows dusk.
I long for your touch.

Poet’s Notes:  An Mhaighdean Mhara (which could be pronounced Awn my-dee-an maura depending on the dialect) is an Irish expression for a selkie’s song (song about a mermaid). It appears as the lullaby on the seventh track from the soundtrack to John Sayles's movie, The Secret of Roan Inish (1994), composed by Mason Daring and performed by Eileen Loughanne.

Selkies are said to live as seals in the sea but shed their skin to become human on land. Folklore about selkies is often romantic tragedy (and this poem is no exception). Sometimes the human will not know that his lover is a selkie and wakes to find her gone. A selkie can only make contact with one human for a short amount of time before returning to the sea. (Adapted from Wikipedia)
Posted by Steven Wittenberg Gordon, MD at 4:48 PM