Poem of the Day: “Song for Beijing’s Factory Friend” by Meg Eden

Songs of Eretz Poetry Review is pleased to present “Song for Beijing’s Factory Friend” by Meg Eden. Ms. Eden's work has been published in various magazines, including: Rattle, Drunken Boat, Eleven Eleven, and Rock & Sling. Her work received second place in the 2014 Ian MacMillan Fiction contest. Her collections include:  Your Son (The Florence Kahn Memorial Award), Rotary Phones and Facebook (Dancing Girl Press), and The Girl Who Came Back (Red Bird Chapbooks). She teaches at the University of Maryland. Check out her work at: https://www.facebook.com/megedenwritespoems.

My eyes are factory
needles, always 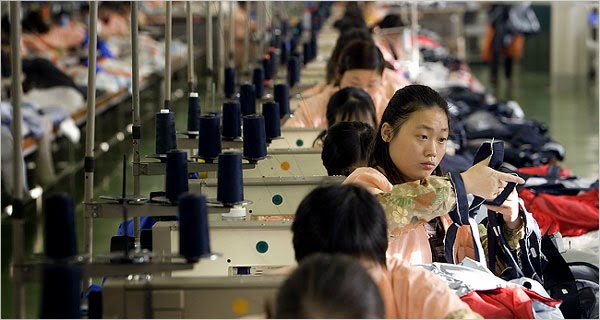 moving up and down—

My friend got a needle
stuck between the joints
in her wrist. Like Christ.

She wasn’t careful, and now
her hand isn’t useable.
Unmarriable.

The dolls we make are for
one-day parties: given
as favors, remain in a chest,

their heads pop off
if loved too much (it’s like
the girls know this).

I know I too am disposable,
one-time-use, but neither am I
stuck in this city, the way

my mother was—I am able
to reconcile the world
in my phone. There are other jobs

that will take me. And I will be
the girl whose wrists remain clean,
who marries late to a man

she loves, who can buy her
the world, the way all those
import movies go.

Poet’s Notes:  This poem is part of a collection called A Week with Beijing, which is a response to my trip to Beijing in 2006, as the city prepared for the winter Olympics of 2008. This was the first trip I’d been on that showed the rawness of a city, not just the fluffy tourism I was used to as a kid. I felt a need to respond to this city and this experience—so this series of poems personifies Beijing as a woman as I visit her home, and talk and interact with her.

Editor’s Note:  I find that the terse, blunt, haiku-like stanzas support the subtext, underneath the message of hope, concerning the difficult working conditions found in the factories of China.
Posted by Steven Wittenberg Gordon, MD at 6:51 PM