Songs of Eretz Poetry Review is pleased to present “Beijing’s Newspaper talks about Jilin Poultry Plant Fire” by Meg Eden.  In addition to this, her second, appearance in the Review, Ms. Eden’s work has been published in various magazines, including:  Rattle, Drunken Boat, Eleven Eleven, and Rock & Sling. Her work received second place in the 2014 Ian MacMillan Fiction contest. Her collections include:  Your Son (The Florence Kahn Memorial Award), Rotary Phones and Facebook (Dancing Girl Press), and The Girl Who Came Back (Red Bird Chapbooks). She teaches at the University of Maryland. Check out her work at https://www.facebook.com/megedenwritespoems. 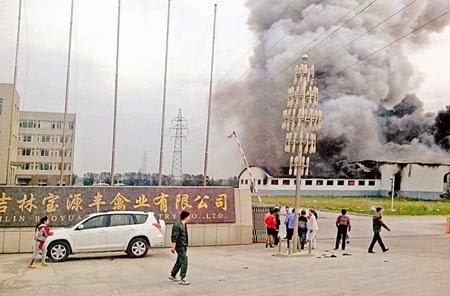 If people say the Wall was built on bones,
Then how much more must we give, to survive?
Our progress as an enterprise inspires.

The doors were locked to keep them on their job—
A manager explains, They’ll milk their breaks,
or so we say: “our wall is built on bones”.

So when the fire came, there was one door—
One hundred workers died inside the plant.
Our progress as an enterprise inspires.

The bolted exits were a violation,
and experts say there will be punishments,
but we all know the world is built on bones.

A woman found her husband in the floor,
and in the stairwell fifty more endured.
Our progress as an enterprise inspires.

The firemen ran out of water here,
but next time they will have enough to use.
If people say the Wall was built on bones,
then look—our enterprise, it grows! it grows!

Poet’s Notes:  This poem is part of a collection called A Week with Beijing, which is a response to my trip to Beijing in 2006, as the city prepared for the winter Olympics of 2008. This was the first trip I’d been on that showed the rawness of a city, not just the fluffy tourism I was used to as a kid. I felt a need to respond to this city and this experience—so this series of poems personifies Beijing as a woman as I visit her home, and talk and interact with her.

Editor’s Note:  I appreciate the way that Ms. Eden’s reference to a real-world tragedy makes this villanelle a kind of elegy at the same time.
Posted by Steven Wittenberg Gordon, MD at 2:23 PM