Poem of the Day: “In the Gorge” by Anne Carly Abad

Songs of Eretz Poetry Review is pleased to present “In the Gorge” by Anne Carly Abad.  Ms. Abad has recently been nominated for the Pushcart Prize for her poem "The Bitter Gourd's Fate," which was published by Niteblade.  Her work has appeared or will appear in Crucible Magazine, Apex, and Not One of Us, in addition to appearances in the Songs of Eretz quarterly e-zine.  Find out more about her at http://the-sword-that-speaks.blogspot.com. 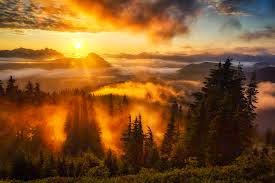 In the Gorge
Anne Carly Abad

supple bend
a path that folds
into trees

Poet’s Notes:  "In the Gorge" is an experiment I tried, in which the goal is to collect images during my travels in Asia and create a story out of them. I put together images from fall, rain, summer and winter to depict how the body changes the way nature does, sensual one time and then frigid at another.

Editor’s Note:  I like the short Japanese form feel, the crisp images, and the simplicity of this poem.
Posted by Steven Wittenberg Gordon, MD at 8:03 PM