Poem of the Day: “Heart Throb” by Gerard Sarnat, Poet of the Week

Songs of Eretz Poetry Review is pleased to present “Heart Throb” by Gerard Sarnat our Poet of the Week for the week of January 4, 2015.  One of Dr. Sarnat’s poems will be featured in the Review every day this week.  His bio may be found here:  http://eretzsongs.blogspot.com/2015/01/poet-of-week-gerard-sarnat.html. 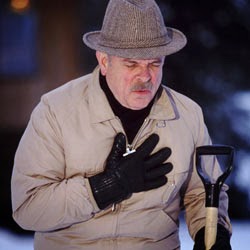 Out on the town after shoveling last season’s first snow
that blocks our main artery, braked for a pile-up,
red cell accidents inch forward
while white blood corpuscle lights head toward
where they came from on the other side of the dividers

to macrophage snarled traffic. Caught in plasma sludge
as normal three lanes stenose down to two,
coagulated malady's compounded
when a weak-walled aneurysm's blown out,
vessel debris collides until it thromboses my coronary.

Poet’s Notes:  I first imagined this forty years ago during my medical training's rotation on a hematology service. Driving on the 101 Freeway toward San Francisco on a Saturday night, the red brake lights in front and white headlights coming toward my car reminded me of being in a blood vessel. The actual December 2014 poem now adds the element of an older person thrombosing these blood cells in a heart attack shoveling winter’s first snow.

Editor’s Note:  The poetic conceit here is clever, and I love (what was for me) the surprise ending of the speaker musing about his own coronary.
Posted by Steven Wittenberg Gordon, MD at 11:09 AM