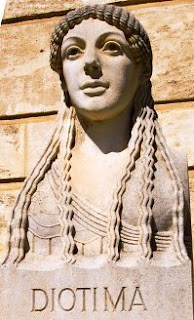 It was Diotima who first declared
Long ago this truth:
Remember that love is not a god
It is a demon
And so it must possess

Poet’s Notes:  In Plato's Symposium, Diotima, the Pythia, teaches Socrates about the nature of love. Her main belief is that Eros (personified love) cannot be a deity. Rather, he is a d(a)emon, a demigod half-way between the perfect deities and mankind. He cannot be a deity, because the deities, by being perfect, can want for nothing; but love is always something which one lacks. Therefore, love "is a demon / and so it must possess". The play on words here is an equivocation between (eu)daemon, a positive spiritual entity, and the modern demon known for possessing its victims, with possession being used also in a double sense.

This poem was more or less created in a minute's inspiration at home. Originally, it consisted only of the last three verses; but when it came time to prepare it for publication, I thought to add a little clarifying contextual note of two verses to indicate the reference to Diotima.
Posted by Steven Wittenberg Gordon, MD at 7:13 PM