In that day, the solstice sun 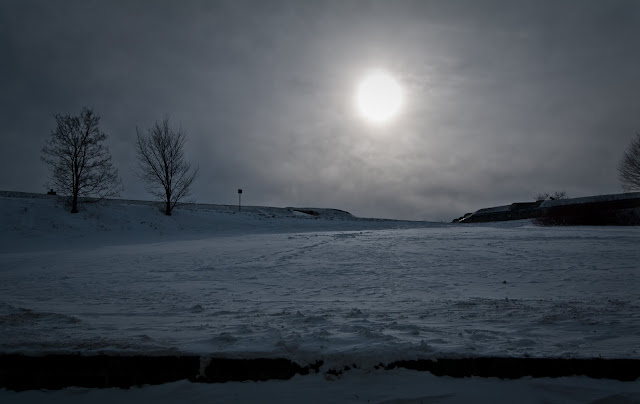 In that day, the sun did not
Stand still, but the night did
After you slinked away
Hope of your return dimmed
Each moment swallowed
By darkness, forsook peace
Of solitude

In that day, the sea
Of forgetfulness
Was caustic, as slaked lime
And consummate as acid

Poet’s Notes:  This poem, about a failed relationship, is centered on the winter solstice, which is close to Christmas—a time when loneliness and depression kick in hard for those who have lost their mate for whatever reason; the bleak mood is accentuated by winter. In “The Slaked Sun,” many of the details of precisely how or why the relationship had failed are omitted, but any picture deduced by the reader is fine.

One could imagine the speaker’s partner walking out on him/her on a winter solstice, apparently without notice and likely agonizing over it on that longest night of the year; “longest” also takes on emotional significance. At the solstice, the sun appears to “stand still” (a turning point in its apparent motion across the sky). The poem monopolizes on that (as time would seem to stand still for the speaker in emotional agony/grief, when despair tries to enter).

The reference to the “sea of forgetfulness” (which is an annotated form of Micah 7:19) suggests forgiveness. But the one who had left did not give that forgiveness.  There are several stages* of grief—after denial and commiseration comes anger. We see it here with the reference to the “sea of forgetfulness” as caustic and acidic (not chemically simultaneously, but metaphorically, yes). The speaker cannot forget the failure and becomes caustic himself/herself.

The speaker’s anger is further demonstrated by the allusion of the one who had abandoned as a lizard. But life will continue as usual (penultimate verse). It must for the speaker’s emotional survival. Ultimately, he/she must come to terms and be satisfied with the outcome.

The title is ironic. A slaked sun could mean a caustic and angry sun (the sun, which is the “giver of life,” might prompt the plaintive wail, Why me, God!), but also that title suggests a satisfied and sated sun.

Though this is not another Adam & Eve poem, the Biblical allusions do suggest a relational conflict, one we might experience now, just as it had been experienced from the get-go.

* The 5 stages do not occur linearly: Denial & Isolation, Anger, Bargaining, Depression, and Acceptance. On Death and Dying by Elisabeth Kübler-Ross, M.D. (Simon and Schuster, 1969).
Posted by Steven Wittenberg Gordon, MD at 3:14 PM