Poem of the Day: "Excursion" by Carolyn Martin, Poet of the Week

Songs of Eretz Poetry Review is pleased to present “Excursion” by Carolyn Martin, Poet of the Week.  A brief biography of the poet may be found here:  http://eretzsongs.blogspot.com/2014/12/the-songs-of-eretz-poet-of-week-for.html. 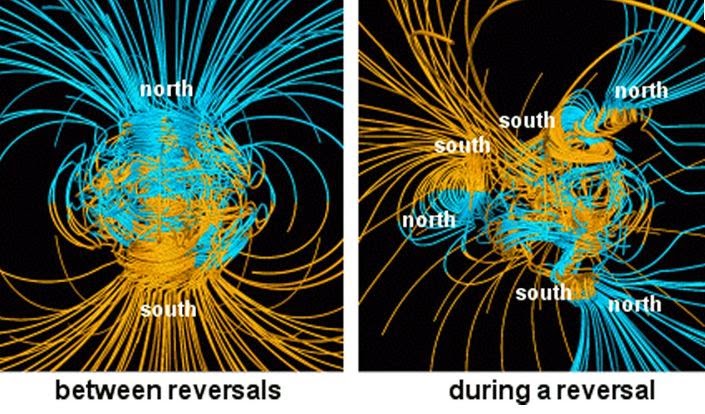 Look.
When compasses point south
and navigators lose their way,
the sun rings out of tune.
Shifts happen, we are warned.
Earth is overdue.

Happens all the time,
chide paleomagnetists.
Poles flip, rebound as often
as Ice Ages flow. In geologic time,
that’s once a week or so.

that rift. Eroding peace unstapling
seams that bind us each to each.
Upheavals find a way
of breaking through.
We’ll wobble on the Milky Way
until the sun re-calibrates.
In geologic time, an answer’s due.

Poet’s Notes:  One of the most surprising and delightful sources of poetic language for me has become scientific articles. That’s where I learned that the “sun rings like a bell” and that “excursion” is a term applied to the shifting magnetic poles of the planet. I now have a file of scientific articles that are rich in imagery and interesting facts – like San Jose moving closer to Japan by three inches every year. Several more have found their way into other poems.

Editor’s Note:  Songs of Eretz is one of only a few mainstream serials that publish (and welcome) speculative poetry, so I am particularly pleased to present this speculative piece by this poet.  “Excursion” was originally published in Science Poetry, ed. by Neil Harding McAlister and Zara McAlister, 2011.
Posted by Steven Wittenberg Gordon, MD at 1:03 PM