Poem of the Day: "Effed by the F" by James Frederick William Rowe

The Songs of Eretz Poetry Review Poem of the Day for December 4, 2014 is "Effed by the F" by James Frederick William Rowe.  Mr. Rowe was the subject of the July 2014 (Volume 1, Issue 7) Songs of Eretz Poetry E-zine special featured poet issue, where additional poems by this poet and his biography may be found http://eretzsongs.blogspot.com/p/e-zine_4.html. 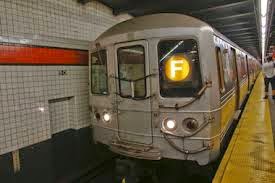 Drinks and philosophy
Lead somehow to Ukrainian politics
And a late departure
Dangerous hours into a subway night
Vlad Putin, you magnificent bastard
The 6 comes on time – as per usual

Fittingly she departs at a civil war station
And our discourse draws anew
An interested interloper
Aaron, the computer scientist
You too have been drinking
And join me perilously on my travels

Another union, now of words
How anti-nationalist, this Broadway-Lafayette
And now the fear of Fast Track
Compounded by a crawling train
Pristinely empty and out of service
11:30 reads my watch, 11:45 the time of reckoning

A promise kept: the F rolls in
Halleluiah, hosanna, hail!
And now we establish new mobile mores
"No confirmation, no visitation."
How philosophical for the homeward bound
A Delancey departure:

You son of a bitch!
How dare you remind me of my danger
The ubiquitous terror of a station-stall
Or worse: The mid-tunnel stoppage
Anticipating the slowdown
Ever fixated upon my question:

Both Norwegian cities
And mad hattered authors pass
But not till a ten dollar fort
Am I safe to turn to husband and wife
Chuckling eavesdroppers of the coined phrase
We so frequently referenced then and now:

Poet's Notes:  "Effed by the F" was borne from out my sincere frustration with living on the F line. Last year, I moved from Park Slope (where I lived for twenty years) to the border between Kensington and Windsor Terrace in Brooklyn, NY. As a consequence of this move, I went from having easy access to the super-fast B, Q, 1, 2, 3, and N trains...to basically being stuck taking the F. Besides being slow as all hell, the F is also subject to an astoundingly high amount of maintenance. I can't count the number of times I've suffered sitting in the station, or between stops, for 10+ minutes waiting for the train to go on its merry way. Moreover, in spite of all the track work, it never once becomes easier to get anywhere, nor is service ever improved in any other way. In fact, I'd say the service has been slowly, but steadily, worsening.

This very real frustration coloured the true events of a night this summer that this poem relates. I was teaching a thrice-weekly 8-10 pm course in philosophy at Baruch, College, and because I could do what I wanted during the summer semester, I decided to hold most of my classes outside. As a consequence of this, I was greeted by a "student-not-student" (Liza) who I had known when I proctored a test for my colleague Dr. Teufel - who taught me to pronounce the "Sich" in the Kantian "Ding-an-Sich" (thing-in-itself) like I was smiling. During class, the very unpleasant smell of rotting garbage came from a stalling garbage truck picking up trash, which was thankfully masked when Liza decided to start smoking a cigarette behind me.

After class, Liza and I caught a drink at a bar on 3rd Avenue and we got to talking about Ukrainian politics. She's from the Ukraine, and we had a stimulating conversation on this topic, where I espoused a sympathetic view of Putin's interference in what I thought was a lawless coup against the legitimate government by the Kievan rioters.

I was in mortal fear that the F train would not be running, so we left fairly early to catch the train. She gets off at 14th Street-Union Square (the Civil War station), and then I meet Aaron, a besotted computer scientist. By this time, we coined "(don't get) effed by the F" and "no confirmation, no visitation", the latter owing to the fact that he did not meet a friend because he refused to answer his calls. After Aaron left, I actually began to pen this poem.

Somehow, the F managed to not screw me over that night, and the rest of the trip went by without a hitch. I passed by Bergen St. (a Norwegian city), Carroll St. (Lewis Carroll), and finally arrived at my home station of Fort Hamilton Parkway (Alexander Hamilton).

Since writing this poem, I have been effed by the F on multiple occasions.

Oh, and this poem is likely to appear in a forthcoming collection of poems I've written on the subway. This collection is tentatively entitled, "Because Convenience is a Such a Waste of Time." As I have not actually begun work on collecting the poems together, it should will be quite a while before it is published.

Editor's Note:  I was attracted by this poem as it has a nice, old New York School feel to it.
Posted by Steven Wittenberg Gordon, MD at 7:10 PM