Songs of Eretz Poetry Review is pleased to present another unpublished poem by Brandon Marlon, "Heavenward in a Whirlwind."  A biography of Mr. Marlon may be found here:  http://eretzsongs.blogspot.com/2014/10/poetry-review-special-feature-sukkot-by.html.

Heavenward in a Whirlwind 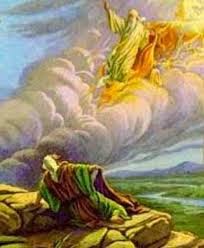 From Gilgal to Bethel to Jericho and the Jordan,
the prophet could not cast off his apprentice.
Parting the river to cross on dry ground,
Elijah solicited his protégé’s last request,
entertaining a plea for a double portion of spirit.
Garbed in feathery camelhair garments,
with a leather belt strapped round his waist,
he readily leapt upon flaming chariot
whose charging steeds seared with drive,
relinquishing his coat to his successor.

Elisha gawked and just barely glimpsed
that flashing blaze whizzing past in a blur,
awing his senses into momentary numbness.
Shredding his own raiment in grief,
watery-eyed yet confirmed in resolve,
the heir assumed the imparted mantle—
the very article of his original initiation
while plowing with oxen in his father’s fields—
trusting the uplifted had been spirited away
neither to mountain height nor valley depth,
but borne aloft to the unearthly realm.

Poet's Notes:  This poem portrays the traditional transition of prophetic authority from the master, Eliyahu/Elijah, to his apprentice, Elisha. The remarkable passage of Elijah from this world to the next - taken alive to heaven - is a rare event in the Biblical narrative and signals the uniqueness of this personality. Elijah became associated with the angel Sandalphon, who wreathes the prayers of Israel. Elisha, meanwhile, is left to follow in the wake of his tutor's worldly career speaking truth to power and bringing a moral-ethical message to the Jewish People.

Editor's Note:  How refreshing to read a poetic rendition of a scene from Jewish lore! I believe this story sings in the same epic manner as any poem about the mythology of the ancient Greeks or Romans.  And even though the story of Elijah the Prophet arguably is more of a topic for Passover than Sukkot, I could not wait until April to present this beautiful piece.
Posted by Steven Wittenberg Gordon, MD at 3:30 PM