Poem of the Day: "At night Chinamen jump" by Frank O'Hara

The Songs of Eretz Poetry Review Poem of the Day for October 23, 2014 is "At night Chinamen jump" by Frank O'Hara.  The poem was first published in 1957 in Meditations in an Emergency.  The text of the poem may be found here:  http://www.poetryfoundation.org/poem/171385, and biographical information about O'Hara may be found here:  http://eretzsongs.blogspot.com/2014/10/mooc-modpo-poem-of-day-day-lady-died-by.html. 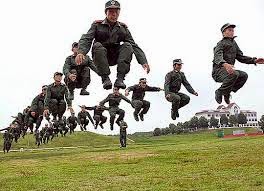 The poem is arranged in ten rhyming couplets with three feet in each line.  It reads a bit like Hickory Dickory Dock.  The choice of form is unusual for a poet known for his association with the New York School with its "I-do-this, I-do-that," style.  O'Hara may have chosen it to introduce a bit of playfulness, even irony.

America was hardly on good terms with China in 1957.  We still are not, but the relationship was even more strained then.  The poem might have been a disguised effort by O'Hara to get Americans to think about China just a little differently and with less fear.
Posted by Steven Wittenberg Gordon, MD at 9:11 PM