MOOC ModPo Poem of the Day: "Invasion of the Body Snatchers" by Bernadette Mayer 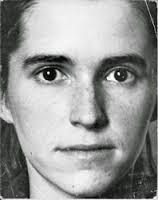 The Songs of Eretz Poetry Review MOOC ModPo Poem of the Day is "Invasion of the Body Snatchers" by Bernadette Mayer.  The text of the poem as well as an audio reading of it by the poet may be found here:  http://writing.upenn.edu/pennsound/x/Mayer/invasion_body_snatchers.php.

Bernadette Mayer (b. 1945) (pictured) is associated with the New York School of Poets.  Her work has been compared to that of Gertrude Stein, and a critic once characterized her style as one that "cancels the boundaries between prose and poetry."  Reference to this and additional biographical information may be found here:  http://www.poetryfoundation.org/bio/bernadette-mayer.

The poem reads (and is read by the poet in the recording) in a fast but not quite frantic pace.  The use of commas, which normally would allow for pauses, somehow enhances this affect as the narrative flows from one subject to another.  Time is compressed.  There is not enough time.

The eighth line of this thirty-line poem mentions turning the clocks back for daylight savings.  This would seem to add an extra hour to the day, as the speaker muses, but instead causes only confusion.  Time is disrupted.

After her daughter is put to bed, the speaker is left with two hours before she herself must retire.  She attempts to use this time to write and to read several books at once or in rapid succession.  Time is short and precious.  And there is not enough.
Posted by Steven Wittenberg Gordon, MD at 8:43 PM