Songs of Eretz Poetry Review is pleased to present "Season" by Steven Mayoff.  Mr. Mayoff was born and raised in Montreal and now resides in rural Prince Edward Island.  His story collection, Fatted Calf Blues, won a Prince Edward Island Book Award.  His first novel, Our Lady Of Steerage, will be published in early 2015.  He is currently working on his first poetry collection, Red Planet Postcards, as well as a libretto for an opera with a Greenlandic composer. 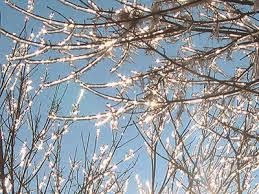 An encasement
of ice over bark and bud

these crystal splinters a culmination
of a thousand past winters.

At the first sign of thaw
curious fingers prod the exoskeletal

A brittle cackling even as icicles weep.

a loose awakening of mysterious ways.

Poet’s Notes:  I live on twenty-two acres of wooded land beside a river.  The first winter that I experienced an ice storm in this rural setting, I was fascinated by the visual wonder of trees encased in ice.  This seemed to be a physical manifestation of the isolation I was feeling, the beauty and the loneliness of it.  I called the poem “Season,” because this seemed to be a kind of interim season entirely:  a season of despair and awe somewhere between winter and spring.

Editor's Note:  I love the ethereal mood and gentle rhythm of this piece as well as the sing-song assonance on the sound "ay" in the second half of it.  "Season" was first published in Cerulean Rain in January 2008.
Posted by Steven Wittenberg Gordon, MD at 4:55 PM