Poem of the Day: "And Ut Pictura Poesis Is Her Name" by John Ashbery 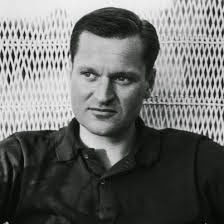 The Pulitzer Prize winning poet, John Ashbery (b. 1927) (pictured) is widely considered to be one the greatest poets of the twentieth century.  One critic described Ashbery's poetic style as "simultaneously incomprehensible and intelligent…with a weird pulsating rhythm."  Ashbery is the author of many award-winning and influential poetry collections.  Reference to this and additional biographical information may be found here:  http://www.poetryfoundation.org/bio/john-ashbery.

Ut Pictura Poesis:  As with painting, poetry.  This view of poetry had a profound influence on the poets of the New York School with whom Ashbery is closely associated.  The abstract expressionist painters of the New York School, including Jackson Pollock, Willem de Kooning, Franz Kline, and others, valued spontaneity and improvisation over a reflective, cerebral approach.  Reference to this and additional information about abstract expressionism may be found here:  http://www.metmuseum.org/toah/hd/abex/hd_abex.htm.

"You can't say it that way anymore."  This is the opening line of the poem as well as a summary of its content.  Ashbery might have meant by this that the era of characterizing beauty in traditional terms is over and implies that to persist in an old school approach to the characterization of beauty is to miss that which is most beautiful perhaps entirely.

From a meta-poetic or even meta-pedagogic point of view, Ashbery here offers a poem about how to write a poem in the modern era.  The first half of the piece lists examples of what should be included in a modern poem.  The third quarter of the poem gives an example of a modern poem--a poem within a poem.  The final quarter of the poem opens with, "When you write poetry:".  The use of a colon here is critical--it makes the line mean something like, "when you go about writing a poem, you must do the following."  What follows is advice as to what to do.  The poem might just as easily have been titled "And Ars Poetica Is Her Name."
Posted by Steven Wittenberg Gordon, MD at 9:46 PM