In honor of the holiday, Songs of Eretz Poetry Review is pleased to present "Sukkot," a previously unpublished poem by Brandon Marlon.  Mr. Marlon is a playwright, screenwriter, and poet from Ottawa, Canada.  He received his B.A. (Hon.) in Drama and English from the University of Toronto and his M.A. in English from the University of Victoria.  His script, The Bleeding Season, won the 2007 Canadian Jewish Playwriting Competition.  His poetry has been published in:  Canada, the U.S., Israel, India, and England in various publications, including:  The Canadian Jewish News, Streeteaters, Poetica, Yalla Journal, YallaJournal.com, Jewish Tribune, The Bulletin, The Victoriad, The Trinity Review, UC Review, The Deronda Review, Emunah Magazine, Lantern Magazine, Voices Israel, BirthrightIsrael.com, IsraelNationalNews.com, Bywords.ca, The Steel Chisel, U of T Magazine, Swept Media, Calliope, Grey Sparrow Journal, The Bangalore Review, The London Magazine, One Throne Magazine, as well as being recorded for Israel National News radio. He has released two poetry volumes, Inspirations of Israel: Poetry for a Land and People (2008), followed by Judean Dreams (2009).  Visit him at:  www.brandonmarlon.com 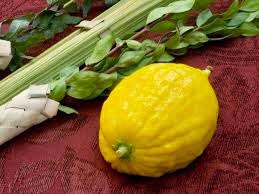 Across Judean hills treed with willow and myrtle,
they self-embower in thatched huts with palm fronds,
some threadbare, all makeshift,
each a tabernacle in miniature,
brimful of empathy for the unhoused
and pungent aromas of shallot and scallion.

Partaking in the warmth of loaf and ladle,
celebrants wonder at the autumnal arrival
of the Ushpizin, blessed and solicited,
ancestral invitees making the rounds
of mindful descendants,
touring booths to partake of bread and broth.

Poet's Notes:  This poem gives a glimpse into the Jewish festival of Sukkot, known as the Feast of Tabernacles or Feast of Booths to some.  The poem was written in such a way so as to depict the scenario of this holiday both in ancient days as well as today.  The Ushpizin are hallowed ancestors beckoned to join the iterated event commemorating the Israelites' living conditions during the Exodus.

Editor's Note:  Sukkot is perhaps my favorite holiday, and I believe Mr. Marlon has captured its essence in his lovely poetic tribute to it.  The seven-day festival begins at sundown today this year (I say, "this year," as the Jews follow a lunar calendar, which results in the holiday falling on different days of the Roman calendar each year).  The willow, myrtle, and palm bound together make the ritual object called the lulav.  Along with the etrog or citron, they constitute the "four species" (pictured) that, when taken and shaken in a ritual manner, are said to bring rain in its proper amount and at the proper time and season.  Each of the four species is steeped in symbolism.  For more information, see:  http://www.jewfaq.org/holiday5.htm.  Chag sameach!
Posted by Steven Wittenberg Gordon, MD at 7:49 AM