The Songs of Eretz Poet of the Month for September 2014: Sylvia Plath 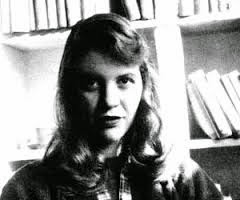 The Songs of Eretz Poetry Review Poet of the Month for September 2014 is Sylvia Plath (1932 - 1963) (pictured).  She was born and raised in Boston, but moved to Wellesley, Massachusetts at the age of eight upon the death of her father.  She showed early promise as a poet and writer, publishing in her teens.  She attended Smith College on a scholarship, and was awarded a guest editorship of Mademoiselle in 1953.  Probably a manic depressive, she attempted suicide that year, was institutionalized, and received electroshock therapy.  She chronicled these events in her autobiographical and only published novel, The Bell Jar (1963).

In 1956, she was awarded a Fulbright grant to study at Cambridge where she met and married poet Ted Hughes with whom she eventually had two children.  She returned to the United States and briefly taught English at Smith from 1957 - 1958.  Plath's marriage ended badly with divorce proceedings that began in 1962 over allegations of infidelity on the part of Hughes.  The divorce was not yet final at the time of Plath's death in 1963, which ironically gave Hughes control of her estate.

She published one poetry collection in her lifetime, Colossus (1960), and another, Ariel, was published posthumously in 1965.  Her poetry is famous for its raw emotion, marriage of love and death, painful honesty, and its dark, bleak, despairing portrayal of the human condition, particularly the submission/oppression of the female intellect.

Feminists adopted Plath as a kind of martyr, whose suicide at the age of thirty was speculated to have been triggered by profound depression stimulated by the memory of and abandonment by her authoritarian father, the betrayal by her philandering husband, the demands of motherhood, and her deep loathing for the role that she was expected to play as a housewife in the early 1960s.  Reference to this and additional detailed biographical information may be found here:  http://www.poetryfoundation.org/bio/sylvia-plath.
Posted by Steven Wittenberg Gordon, MD at 5:02 PM