MOOC ModPo Poem of the Day: A Survey of "Song of Myself" by Walt Whitman 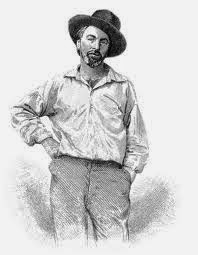 Whitman begins "Song of Myself" with, "I celebrate myself, and sing myself."  He invites his readers to "lean and loafe" with him while he literally waxes poetic about a blade of grass.  The grass is alive and as such represents for Whitman the connection between all living things.  Indeed, for Whitman, even too the inorganic elements that make up the earth and its atmosphere are connected--as he proclaims in part 2, the atmosphere "…is for my mouth forever, I am in love with it."  Whitman goes on to express the desire to revel in the air, to feel it on his naked skin.  For Whitman, as he reveals in part 3, there is no beginning or end for the various cycles of life and inorganic things of the earth.  There is ever the "urge and urge and urge / Always the procreant urge of the world."

In part 5, Whitman waxes almost pornographic as he sings of the equal value of all things, an inclusive, democratic world view that invites every reader to revel in the stuff of life with him.  In part 6, Whitman refers again to a blade of grass and how simple yet profound and beautiful a creation it is and, as a natural extension, how likewise is all of Creation.  In part 8, Whitman goes on to list many doings and happenings that he observed--both savory and unsavory--but he makes no distinction between savory and unsavory--for Whitman, everything in life has its special savor.

In part 10, Whitman shares several stories with us.  In the first stanza, he tells of a hunting trip that he enjoyed with his dog.  In the second and third stanzas, he tells the story of a fishing expedition and the clam bake afterwards.  In the next stanza, Whitman recounts some details of the wedding of a frontier trapper to an Indian maiden, and in the final stanza, he writes of a time when he gave food and shelter to a runaway slave.  These are all examples of the joys of life and of living well--the simple pleasures of life. In part 14, Whitman expresses this sentiment unequivocally when he proclaims, "What is commonest, cheapest, nearest, easiest, is Me."

Finally, in part 47, Whitman claims to be a great teacher, but a teacher who wants his readers to surpass him.  He invites you, his readers, to follow him and his teachings, but, regardless, he will dog you, determined that his "…words itch at your ears till you understand them."  And where will you find Walt Whitman?  Returning to his opening theme, in part 52, the finale of the poem, he simply states, "If you want me again look for me under your boot-soles."
Posted by Steven Wittenberg Gordon, MD at 4:44 PM