Songs of Eretz Poetry Review is pleased to present "Valediction for the Dungeon Master" by Mark Jones.  Mr. Jones is an English professor who teaches a range of traditional courses on subjects including Shakespeare, Arthurian literature, and linguistics.  He has sometimes taught less conventional subjects, including one course centered on Japanese visual culture and another on the fiction of H. P. Lovecraft.  As a writing teacher and amateur jazz pianist, he is fascinated by improvisation in music and in other forms of composition.  His creative work has appeared in a variety of journals and magazines including:  Bewildering Stories, Crack the Spine, Red Booth Review, and Vine Leaves Literary Journal.

But from the top of that tower the man had been able to look out upon the sea.
—J. R. R. Tolkien
A true aubade, the textbooks say, 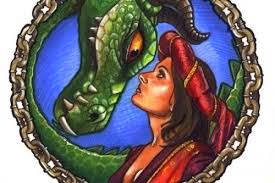 is a song of couples parting
at the break of day.

The best of them, it’s also said,
are those of star-crossed lovers
loath to rise from bed.

But you’re a perfect Romeo,
still sorting dice, although the others
left an hour ago,

and I’ll confess that I’m not yet,
despite my fourteen years and more,
quite a Juliet,

although I won’t deny myself
the satisfaction that I play
a tolerable elf.

(You said as much yourself
tonight.  You looked up from the screen and said,
“a tolerable elf,”

and said it with a glint of piercing blue).
Am I permitted just one saving throw,
or must I stay with you

as the adventurers of late were held in thrall
of your graph-paper-conjured
giant’s hall?

The rest have gone, and I alone remain,
another figure to be put away
until the next campaign.

And yet we needn’t take our leave like this.
In former ages lovers met the dawn
with tender kiss

or raged against the interfering sun,
telling the busy fool to pester someone else:
how they could make him run!

Indeed, such marvels you and I
have seen this night: charting whole new kingdoms,
we’ve given our own the lie.

Or rather, we have rendered ours more true:
traveling under crimson heaven, we come
to know the blue,

and dragons soaring in those ancient skies
now lend their fiery magic to
this sunrise,

whose rosy talons now beckon at the window.
We’ve shelved the manuals of last night’s play,
and I must go.

But let our parting be of sweetest sorrow,
as we climb once more our tower of fantasy.
Clasping hands, let us go and greet tomorrow,
gazing all the while upon the sea.

Poet’s Notes:  When Gary Gygax died in 2008, hordes of erstwhile player-characters decided to come clean, and for a while there were tributes everywhere—on YouTube, in major newspapers, on late-night comedy shows, and in several book-length memoirs about Dungeons & Dragons.  I confess that some decades ago, I too was a compulsive D&D player and have sometimes wondered how much my own vocation as professor of literature owes to those hours spent imagining other worlds and chucking dice late into the night.  For a long time I have been meaning to write about what those days were like, but I have held off until recently.  Here at last, I suppose, is my own Gygax tribute, fashioned in the form of a traditional aubade.

Editor's Note:  I really enjoyed Mr. Jones' take on the topic, being (alas, I date myself) as I was one of the first to play Dungeons & Dragons back in the day when all we had was Mr. Gygax's boxed set of three paperbacked books, a chess set, oddly shaped dice, and our imaginations.  The allusions to Shakespeare--including the use of a Shakespearean aside--make for a seamless blend of classic and contemporary.  How interesting, too, that the poet is a man, yet the speaker is female.

“Valediction for the Dungeon Master” was first published in Niteblade.  For additional information about the aubade genre and some more examples of it, see http://ruthie822.blogspot.com/2011/04/poetic-genre-aubade.html.
Posted by Steven Wittenberg Gordon, MD at 7:34 PM