MOOC ModPo Bonus Feature: "In a Station of the Metro" by Ezra Pound

Songs of Eretz Poetry Review is pleased to offer a MOOC ModPo bonus feature, "In a Station of the Metro" by Ezra Pound (1885 - 1972) (pictured), first published in Poetry in 1913.  A brief biography and references may be found here:  http://eretzsongs.blogspot.com/2014/05/poem-of-day-girl-by-ezra-pound.html.  The poem is in the public domain and therefore legally reprinted here. 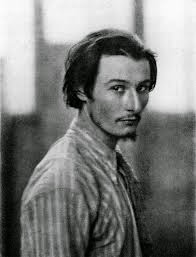 In a Station of the Metro
Ezra Pound

In "In a Station of the Metro," the white spaces may carry more content than the black words.  Ezra Pound used white spaces within lines instead of line or stanza breaks to indicate the linear movement of a train from which he was observing things that passed.  Faces were blurred, appearing as "apparition."  Upon passing a tree, first the petals of the flowers at the end of the branch were observed, then the black bough.  The space before the period at the end of the poem indicates that the train moved on, but the observer stopped recording observations at that point as it passed through the station.

Posted by Steven Wittenberg Gordon, MD at 10:19 AM