"The Dream of Defeat" by James Frederick William Rowe 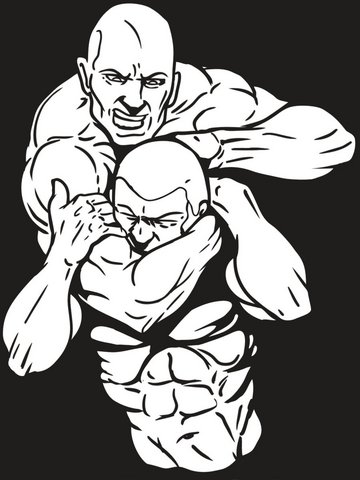 The pain is a choice
But the loss of breath
The restriction of blood
That is fate
With pain you can bargain:
Give up an arm
An eye
Pay whatever the price
In the currency it claims
To broker a deal
To endure
But against this
All resistance is folly
The vanity of a clouded mind
It is not submission
It is succumbing
And all you may gain
In the strife of your struggle
In the torment of your twisting
Is perhaps a few seconds more
A few seconds more

Yet maybe that is enough
For your purpose
For your honour
If so: the choice is made
Fight on
There can be victory
Even in the dream of defeat
In the pride of closed eyes
In a body stilled
But not submitted

Poet’s Notes:  A scene in Blade Runner 2049 initially inspired this poem--I started writing my notes during the film.  However, the poem took on a tone and drew further inspiration from mixed martial arts competitions.

I once watched an interview where one of the members of the Gracie family suggested he preferred to choke his opponents, as it was not a matter of psychology whether they'd submit, but of physiology. If you are willing to "give up an arm / an eye" you can manage to continue the fight. Not so with chokes. If a choke is properly sunk in, it is only a matter of time before the restriction of blood-flow to the brain will induce a state of unconsciousness. At that point, the fight is over: you've lost. Also, of course, if you were to be choked of breath you might actually suffocate to death, but most martial arts chokes are blood restrictive (even though I include them amongst the choke references in the poem).

Now, in spite of the hopelessness of withstanding the choke, one might out of an abundance of pride still choose to struggle against it rather than submit. There is something inherently noble in this. Though it really is foolish to horrifically break your arm or leg in a competition, given that you won't actually die (in the history of Judo, no one has ever died in competition from a choke hold) from a choke hold, there is something inherently honorable in choosing to go to sleep and struggle to the last rather than submit.

The poem recognizes the inherent folly of fighting off the choke but nevertheless respects the pride so displayed. Sometimes, the only victory one can achieve is a moral one, and there is something inherently respectable about choosing that way. This is in no way to call someone who submits to a choke a coward, or cast aspersions upon them at all.  My favorite fighter, Fedor Emelianenko, famously lost to Fabricio Werdum by triangle choke, and I would never insult a man I have always admired—but it shows a certain virtue to be willing to be rendered unconscious rather than tap.

This poem, as noted, was started in the theatre, and then I continued it on the subway, wrote more on the subway again, and polished it off at home. Aesthetically it's fairly simple with a focus on phrasing and word choice to frame the ideas conveyed. The breaks between verses were intuitively chosen to give a poetic structure that I think enhances the artistic merits of the poem, whereas the choice of uneven stanzas is to cement the recognition of the value of the struggle that is denied in the first stanza after the further consideration of the second.

Editor’s Note:  I saw a metaphor for the futility of fighting a terminal illness here rather than the literal interpretation as per the poet's notes.  Either way, this is a powerful piece.
Posted by Steven Wittenberg Gordon, MD at 3:34 PM