A Review by the Editor of “In America” by Diana Goetsch 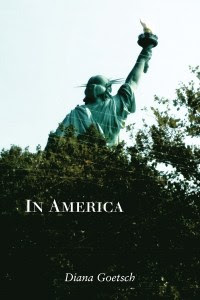 I had the pleasure of reading “In America” by Diana Goetsch, the runner-up for the 2017 Rattle Chapbook Prize (Rattle, Studio City, California, 2017).  The chapbook contains a collection of seventeen poems written from the perspective of a male who has transgendered to a female.  I enjoyed sixteen out of the seventeen poems in the collection--all but the titular (no pun) poem.

The chapbook “In America” begins with a poem “In America” wherein the transgendered speaker rails against TSA agents forced to perform a detailed body search on the speaker.  Personally, I felt bad for the TSA agents who had no choice but to pull the speaker aside because the speaker’s anatomy was non-standard in the initial x-ray scan.  The agents had to do their due diligence.  For example, who knows what kind of explosives could have been concealed in bra area of this individual?  The speaker was incensed that the agents debated what sex the chaperone should be and answered legitimate questions with non-sequiturs just to be annoying.  The title of the poem (and chapbook) is devastatingly ironic, for only “in America” would a transgendered person be treated with such respect by government agents.  In many countries, such agents would take the transgendered off to jail or execution or worse.

The titular poem aside, the rest of the poems in the collection reveal interesting aspects of the lives of the transgendered and transvestites.  It was also interesting and instructive to view the world through their eyes as many of the poems will allow readers willing to suspend any biases to do.

My favorite poem of the collection, “The Fabric Factory, Circa 1987,” describes a typical night in a popular bar that caters to the transgendered and transvestites, a place that for a few drunken hours they can openly be themselves.  The backstories of the various lonely and sad patrons of the establishment are moving and told in a tasteful manner.  Ironically, the bartender, the only straight character other than the "GG" (genetic girl) who has accompanied her transvestite husband (now THAT is a stand-by-your-man-no-matter-what woman!), is perhaps the most interesting, with his come on of, “What’ll be, ladies?”

Another poem I particularly enjoyed is “Whole Lotta Love.”  The advice for what to do “if you’re ever in a fight with someone you love,” applies to any couple, whether they be traditional man and wife, man and man, wife and wife, or whatever.  The message that hit me--and hit me hard--was that romantic love is perhaps not in the exclusive realm of the heterosexuals.  Such is the power of good poetry.

“In America” is available from Rattle for $7.00 here https://www.rattle.com/chapbooks/in-america/ where may also be found a bio of the poet as well as three sample poems from the collection including “The Fabric Factory, Circa 1987.”