A Poem for Hanukkah by the Editor 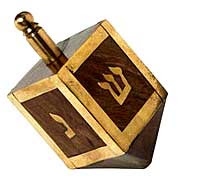 A long time ago as is told in the
Great Books of the Maccabees a
Miracle was wrought by God.  It
Happened in the city of Jerusalem.
There the Temple was rededicated.

Poet’s Notes:  This year’s Hanukkah is a particularly special Hanukkah for the Jews, for the Holy City of Jerusalem was recently rededicated in a way.  The recognition by the United States of all of Jerusalem as the eternal capital of the Jewish State, against all odds, is nothing short of a miracle.  If only my father could have lived to see this day, may his memory be a blessing.

The title of the poem is in Hebrew and means, “A great miracle happened there,” a reference to the dreidel (pictured), the festive four-sided top associated with Hanukkah.  The first letters of each word of the title (Nun, Gimel, Hay, Shin) appear on the dreidel--a secret code to help children remember the meaning of Hanukkah and to fool enemies of the Jews who might have punished them for celebrating Hanukkah during the Diaspora (to them it would appear that the children were just playing with a toy top).  There are no words for “a” or “an” in Hebrew so there would be only the four letters.  Can you find the “secret” message in my poem?