Songs of Eretz Poetry Review is pleased to present “Cold War” by Marcie McGuire. McGuire received her BA from Georgetown College, her library science degree from the University of Kentucky, and a second master’s in creative writing from the University of Missouri.  Her poetry has appeared in Midland and Kansas Quarterly, her flash fiction was published in Well Versed 2017, and her mini-memoir appeared on the Daniel Boone Regional Library website as part of their One Read program in 2016.

A poet, writer, beekeeper, and contra-dance musician, McGuire resides in Missouri with her favorite dance partner and beekeeper.  Learn more about her interests and obsessions at https://marciemcguire.com/. Email her at mcguireml@missouri.edu or friend "Marcie Slone McGuire" on Facebook. 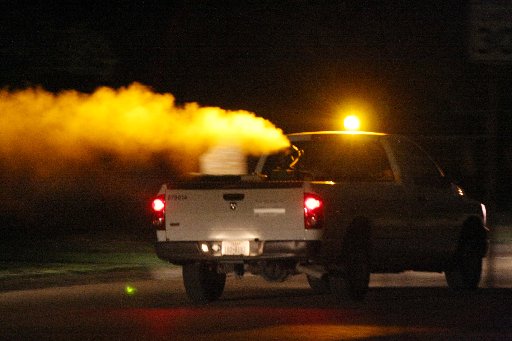 operations, as trucks
rolled through town
spraying for mosquitoes.
But we lived in base housing
too cramped to stay inside
on long summer evenings
without air conditioning
in nineteen fifty-eight
in Clarksville, Tennessee.

Our mothers were nervous
about the chemicals and
worried about our lungs
but didn’t know how harmful
they might be, or whom to ask,
or what to do about it
if there were any danger.
Our fathers could do nothing
to calm their fears. They had
bigger things to worry about
and military secrets to keep.
They were under strict orders
not to wear their uniforms in town.
No one was supposed to know
the Navy was at Fort Campbell,
or where the weapons might be hidden,
or even that there were weapons,
and who knows what else might be
buried deep in the hillsides
behind those wires and electric fences.

When the trucks came through
we huddled near our houses while
the most daring boys charged ahead
through chemical fog, their faces lit by
flashing red lights, imagining towns
up in smoke, hearts pounding as they
ducked between houses on the quad.
At irregular intervals one would make a
break for it, bent low to the ground,
silhouetted against the orange sky, run for
cover, tumble and sprawl into the street,
or roll noisily behind a trash can,
while his friend covered for him, until
someone screamed and everyone started
running at once, fearful of the noise
or the smell, or the dark shapes
of wings and fuselage moving over us,
the larger shadows that passed
between us and the sun.

Poet’s Notes:  Many of my poems come to me first as an image or sensory impression, and these images pull at me until I can begin to tease out their meaning. Often, I am unsure whether the original image came from a dream or something that actually happened. This particular poem began with the acrid smell of chemicals at dusk, flashing emergency lights, the near-hysterical shouting of children, and a strong sense of fear, but it took me a while to remember the trucks that rolled through the quadrangle each evening spraying for mosquitoes when I was a child growing up on a military base.

Once I could place the memory in real time, the poem grew and touched on other aspects of my life. Now that I am much older, I think about how afraid my young parents must have been at the time—stationed at a secret military installation during a time when fear of communism and nuclear war pervaded everything—and how their anxieties fed our imagination. All those secrets. All that fear and dread. Not unlike today.

Editor’s Note:  McGuire has done well in capturing the paranoia of those times and in referencing those times as a metaphor for our current geopolitical military posture.
Posted by Steven Wittenberg Gordon, MD at 5:12 PM