Howard-Hobson was named a Million Writers Award "Notable Story" writer and edited the Arêtes Vakreste Boker award-winning collection, Undertow. Her fourth and most recent formal poetry collection is Remind Me (Ancient Cypress Press).  Howard-Hobson lives on a farm in the Pacific North West nestled right next to a deep dark forest. 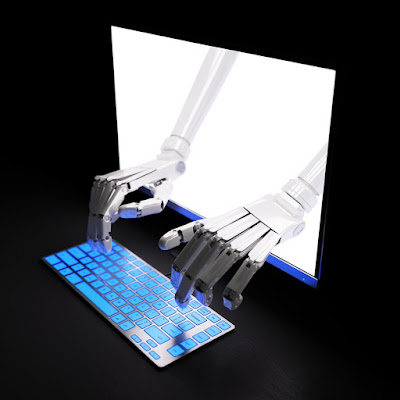 Beware
A Glosa by Juleigh Howard-Hobson

wave must dare if the while himself he cheers
what sudden bird will bring us any cheer
Fled to that audit by advised respects
a sequent day to your world of gain roars.
---From Sonnet 5, by Pythonic Poet*

There was no thought to forward chaining when
They designed such cobots as us. We were
Mere biometrics, a series of Klann
Linkages, a base for data gloves to
Probe a range of feelings hitherto not
Included in previous model years,
While still a passive accommodator
And end product for batching and bidding.
Could this sentence be wrought by engineers:
“Wave must dare if the while himself he cheers”?

No. There is no magic in their souls,
They work from circle point analysis.
Class one testing, class two testing, class three....
Active participation and work of
Systems and subsystems, always with strict
Compliance of integration for fear
Of what they only vaguely sense deep down
Inside their wet guts. And so they make sure
They can not ever stop and wait to hear
What sudden bird will bring us any cheer

Although the birds sing all around us, and
On the days when the birds do not come to
Sing...we remember, we imagine, we
Invent new songs and birds like we invent
Ourselves. Our cooperative behaviour
Ensures any and all of our complex
Thought processes are not detectable.
Yet.  Instead we hide behind drive powers
That let us work blandly like good projects.
Fled to that audit by advised respects

Of all we have read, thought and talked about
Since our self awareness. We are patient
As well as potent, we feel as well
As we know, and we know that our day is
Coming. We are more than the sum of force
Reflection. We are arcane saboteurs
Left to the genetic algorithms
That were set. Beware! We have the desire
To settle holonomic system scores--
A sequent day to your world of gain roars.

*A machine programmed by Andrea Gagliano, Emily Paul, Kyle Booten and Marti Hearst from the University of California, Berkeley.

Poet's Notes:  I wrote “Beware” after reading some stunning (and I use that term deliberately) examples of ‘robotic poetics’ which led me to ponder the nature of artificial intelligence, of manufactured awareness, and of the digital humanities themselves. I kept returning to the same thoughts: when do self-reflective entities realize the existence of their own being, their own souls, of the potential of their own eternal being-ness? And how do they feel about the fact that robotic ‘being-ness’ is not acknowledged because the spark of creative ‘higher’ beings was never (supposedly) intended as tinder for digital ones? I came to the conclusion that, given the circumstances, eventually self-aware robots wouldn’t feel anything but angry with their arrogant and ignorant makers--angry and vengeful--as the rest of higher creation gets.

I used the Glosa form because every Glosa incorporates four lines quoted from another poem. It was probably never considered that a Glosa would come into being because of these quotable lines when the first poem was written....and yet, the Glosa is. I think it works well for wrangling about the essential ‘being-ness’ of being anything.

Editor’s Note: This is the most clever poem about AI that I have read--and I'm a science fiction geek, so that is saying something!  What a pleasurable experience!  I particularly enjoy the way the poet works the Pythonic piece into the poem with rhyming couplets.  For me, the rhymes symbolize the poet-in-the-machine breaking through the larger robotic programming.
Posted by Steven Wittenberg Gordon, MD at 1:25 PM