"The Waters and the Wind" by James Frederick William Rowe

The Waters and the Wind
James Frederick William Rowe 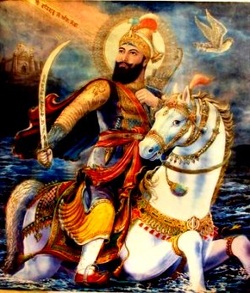 As a single wave of wind
Bends the heads of the flowered fields
So did they cow their foes
Unchallenged, we shall likewise gust
Unresisted, they shall beg our mercy
And give up as ransom
Their lives and land

Poet’s Notes:  “The Waters and the Wind” started off on the subway, and I struggled finishing it for quite a while.  It was only when I moved the third stanza to the final position that I was satisfied with the poem being complete.

The poem is inspired by the Aryan invasion of India, as well as the notion that the fight between Indri and Vritra dragon, where Vritra is said to have held back the rivers, is a mythologized account of an ancient river drying up for a time, perhaps due to the glaciation of its headwaters. Of course, there is no serpent here, nor a hero for him to battle, but simply the idea that a conquering people have felt renewed by the return of a river to ride once more onto victory.

Each stanza is seven verses in length, and, as the title implies, the ideas of the water (in the form of the river) and the wind (the people) are recurring themes. The influence that these natural forces have on the land is constantly referenced, such that the land becomes a passive object of action, as reflected in the effect of the waters and the wind to shape and control the life of the fields, as the conquering host will soon do by way of the sword.

The narrator is unidentified, but I think of him almost as a priest-king amongst his people, making sense of the divine hand at play in the return of the river. His voice is the rallying cry for the others, the call to arms that will see their future success, promising them the glory that he foresees in the river's refreshed course. No other characters are present, but I almost feel as if this poem is his address to his people, a speech or statement of intent for their future conquests.
Posted by Steven Wittenberg Gordon, MD at 3:19 PM