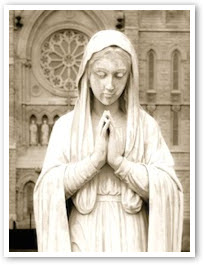 Beneath bare boughs
In citrine light
Illumined
A statue of the blessed virgin
In a cool, spring night
Passing by
I raise a hand
Ave Maria
Hail Mary

Poet’s Notes:  This is a simple poem that captures an actual moment as I was walking past my local church and its statue of the Blessed Virgin Mary. I was struck by the peculiar beauty of the statue contrasted with the bare tree, the evening sky, and the light that shone on the statue. As per my usual custom, I raised a hand to pronounce an ave Maria, and the poem naturally followed from that.

The poem was written as soon as I returned home. I briefly considered adding two more lines but chose instead to preserve the poem’s simplicity. I did agonize over that choice, but sometimes one must know when to be done with something. I am not always laconic, but this poem is succinct.
Posted by Steven Wittenberg Gordon, MD at 6:36 PM