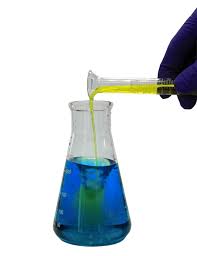 To him, she was hydrogen,
lighter than air,
the stuff of stars.

To her, he was fluorine,
a toxic temptation,
atrociously attractive.

Together in the dark,
they were first explosive,
then corrosive.

She left him for a woman
who gave her breathing space,
turned her to water.

Poet's Notes: This is a light poem with a science flavor using chemical elements to describe characters in a relationship. After working for several years on an epic fantasy told in poems (several of which have appeared in Songs of Eretz Poetry Review), it's been a change of pace to write short, stand-alone pieces. I've been having fun, though I miss the tie I had to King Xau and the other characters in my epic fantasy.
Posted by Steven Wittenberg Gordon, MD at 5:28 PM