Poem of the Day: “The Mummies Above Guanajuato” by Norma Wilson

Songs of Eretz Poetry Review is pleased to present “The Mummies Above Guanajuato” by Norma Wilson.  Professor Wilson was born in Clarksville, Tennessee.  During her childhood, she spent many weekends and summers with her grandparents who sustained themselves on a small farm near Tennessee Ridge.  She moved to Norman, Oklahoma to pursue a Ph. D. in English in 1971.  Her book, Wild Iris, was published in 1978.

Professor Wilson taught in the University of South Dakota English Department for twenty-seven years, retiring in 2005.  Since then, she’s published a chapbook, Under the Rainbow: Poems from Mojácar, and edited a poetry anthology, Memory, Echo, Words.  She lives and writes in a geo-solar house she and her husband built in rural Vermillion, South Dakota.

The Mummies Above Guanajuato
Norma Wilson 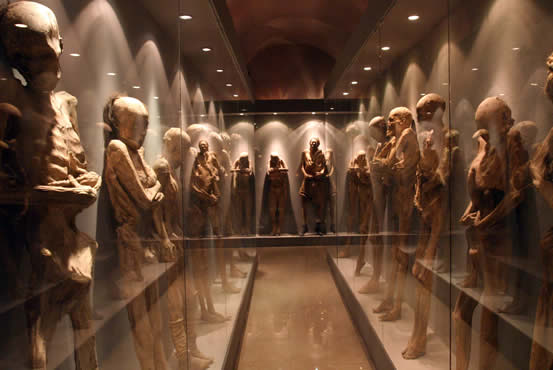 At a bar at the bottom of the hill
the waitress serves us Indios
with chichirons. The cold beer
and salty pig skins are good.
We are thirsty and hungry,
for we have seen skin
turned to paper. Their souls
may have been somewhere else,
in the cumulous sky of yesterday,
or floating above their disinterred bodies,
watching us as we curiously
watched them, not so much in horror
as in pity that they were placed there
for us, the living, who climb the escalera
or ride a bus or taxi to el museo,
to stare at through glass.

Perhaps their souls hovered in pity,
that we should take our life for granted.
When it’s gone it is gone.
No longer to long for reunion
with those who have died and become mummies,
or bones, or soil, or grass, as Whitman said.
One big soul, according to Steinbeck,
or the paper remnant of what happens
to all of us when we die. No longer longing
for the mother and father who gave
us life and have gone to death.
But part of this wondrous Earth
that feeds us until we die,
and then takes back all we have to give her.

Poet’s Notes:  After retiring, my husband and I traveled to Mexico to study the Spanish language and to see more of the country.  We especially loved Guanajuato with its many parks, university, and revolutionary history.  The city is also home to El Museo De Las Momias (pictured).  Between 1865 and 1958, a tax was imposed requiring families to pay a fee to keep bodies of their relatives interred.  If relatives failed to pay the tax, the bodies were disinterred.  Some of these disinterred bones and mummified bodies were stored, and cemetery workers began charging people to view them.  Later the place was made into a museum.  Seeing those bodies transformed to paper inspired my poem.
Posted by Steven Wittenberg Gordon, MD at 12:18 PM